Remembering when Prince wrote that song for you 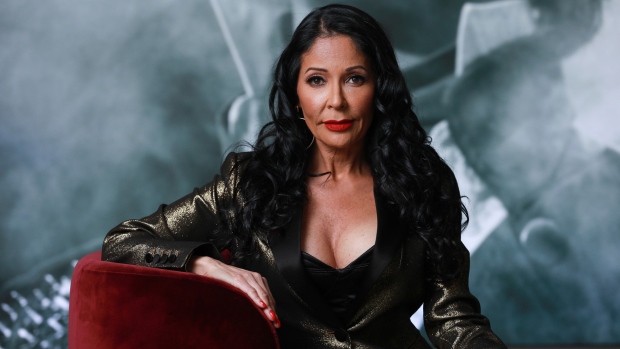 Apollonia Kotero poses for a portrait in front of a photo of Prince at Warner Music Group in Los Angeles on Friday, May 31, 2019. (Photo by Mark Von Holden/Invision/AP)

NEW YORK - By the mid-1980s, the Bangles were already a successful band, touring across the world with airplay on college radio, but they hadn't hit the mainstream in a major way. That's when Prince gave them the gift of a lifetime by crafting a perfect piece of pop confection known to the masses as “Manic Monday.”

The midtempo ditty about the frustrations about the start of the workweek, released in 1986, became their first top 10 hit, paving the way for a slew of others to come.

Yet when Susanna Hoffs thinks back to the song, she has one regret - that she didn't get a chance to thank Prince years later. When she talks about it now, the tears flow freely.

“I feel so sad just thinking that,” she said, crying, in a phone interview with The Associated Press. “As an adult I wanted to thank him and I just didn't get around to it.”

She adds: “It's like to this day, that song, I'll always love singing it. And I love that it's such a universal theme, and that it ... resonates with people in a really deep way.”

Prince's mastery in songwriting didn't just benefit the Bangles: The late superstar penned some of the biggest hits of other acts' careers, from Sinead O'Connor's “Nothing Compares 2 U” to Sheila E's “The Glamorous Life.”

Demo versions of those songs and more appear on the new posthumous album, “Originals.” Jay-Z helped select the songs on the album, which will be available on the music mogul's Tidal streaming platform exclusively for two weeks starting Friday, which would have been Prince's 61st birthday. The album will be widely available on June 21.

In interviews with the AP, Hoffs, Apollonia Kotero , Susannah Melvoin and Taja Sevelle explain the magic behind the songs Prince wrote for them years ago.

THE FAMILY and SINEAD O'CONNOR, “NOTHING COMPARES 2 U”

When Susannah Melvoin - a vocalist in the Prince-formed group The Family - walked into the studio and first heard Prince's demo of a song called “Nothing Compares 2 U,” she thought to herself: “This is just extraordinary.”

Melvoin sang the second verse on the track and said “it was the first time I was set free to sing in my own voice on something for (Prince).”

“I was drunk on that. Hearing it this way and hearing Prince and I on this track, I'm right back there. I'm sort of drunk on every moment of it,” she added.

“Nothing Compares 2 U” appeared on the Family's self-titled 1985 album, but didn't become a No. 1 hit until Sinead O'Connor released her version in 1990.

“Had he not given that track to us for The Family, I'm sure he never would have given it to Sinead O'Connor,” said Melvoin, who said Prince would have kept the song for himself. “Sinead was the right person at the time to foster this record. We weren't. We unfortunately, after the first single, the band went separate ways.”

Melvoin, 55, said songwriting for Prince “was his way of communicating. He wasn't the guy that was the great communicator, like, 'Hey, let's sit down and have a glass of wine and talk' - unless it was later in his life.”

A few weeks before he died, Melvoin said Prince's engineer called and said Prince wanted her to go into the studio to collaborate.

“I can't even tell you what that was for me. When he reaches out to you that way, you know that you're in his internal world,” she said. “It was his full acknowledgement of me as a singer and songwriter, but also as the person that loved him and that he has loved at one time.”

Like Susanna Hoffs, Apollonia Kotero of Apollonia 6 cried thinking back about Prince gifting her a song, but not because she didn't get the chance to thank him: She was able express her gratitude before he died in 2016.

“I got to thank him for picking me. I started crying. And I told him, I said, 'I never thanked you. I have to thank you because' - oh God, every time I say this I get like...,” Kotero said, trailing off as she began to tear up.

“I said, 'Because you picked me, I was able to put food on the table for my family,” she continued. “I was crying really hard. And then he responded ... 'You're making me cry.' I thanked him. I said, 'I love you once. I love you twice. I love you more than beans and rice' - and that's a lot for this Mexican girl.”

Kotero's first recording with Prince was “Sex Shooter,” which appeared on Apollonia 6's 1984 self-titled debut album and was also performed in “Purple Rain.”

“He played it for me with his vocals. Then he also played one with Vanity's vocals. He didn't really want me to focus on that. He kind of just let me to hear it, just for the sake of, 'This is what it was. We're going to make it different,”' Kotero recalled. “When I asked, 'How so?' He said, 'Well, there's a sensuality about you, it's not a blatant sexuality. I just nodded my head, 'OK.' I'm going to agree with him. He's the boss. That was the first time I'd heard it. I fell in love with it. I was honoured. Are you kidding me? I couldn't stop pinching myself.”

Kotero said Prince held a 30th anniversary party for her at Paisley Park in 2014 to celebrate the song, album and “Purple Rain.” And though she's turning 60 in August, Kotero says she's still a sex shooter.

“If I think back about 'Sex Shooter' at my age, well, I'm still shooting love in your direction,” she said. “I'm always going to be a sex shooter - always and forever and I hope it's on my epitaph.”

Both nervous and excited, Susanna Hoffs remembers the pressure she felt when she went in to record “Manic Monday.”

“I can still picture being in that dark room in the recording studio,” Hoffs said. “The moment that I started singing it - it felt so right. My gratitude from that moment until, cut to all these many years later, is so deep.”

Hoffs, 60, said Prince was a fan of the Bangles and he surprised the band by showing up to one of their shows and performing with them onstage. Then he decided to send the group “Manic Monday,” slotting the name Christopher as the song's writer. For Kenny Rogers' “You're My Love” - which also appears on the “Originals” album - Prince used the moniker Joey Coco.

Though the Bangles had some success with its debut album, 1984's “All Over the Place,” it was “Manic Monday” that pushed their careers to new heights and helped their sophomore album, “Different Light,” reach triple platinum status.

The band went on to release more hits with “Walk Like an Egyptian,” ”Eternal Flame,“ ”Hazy Shade of Winter“ and ”In Your Room.“ But ”Manic Monday“ remains special to Hoffs, who recalls hearing it on Top 40 radio for the first time.

“We were standing on a street corner and a convertible pulls up, and we didn't even recognize the song for a second ... hearing ourselves was a great disconnect,” she said. “We were like jumping up and down and being ridiculous, with excitement over it.”

TAJA SEVELLE, “WOULDN'T YOU LOVE TO LOVE ME?”

For Taja Sevelle, being an extra in “Purple Rain” led to a record deal and lifelong friendship with Prince.

Sevelle, a performer who is also an author, recalls spending 48 hours straight in the studio with Prince recording her demo. One of the songs they collaborated on was “Wouldn't You Love to Love Me?” - which became the second single from Sevelle's 1987 self-titled debut, released on Paisley Park Records. It was rumoured the song was originally submitted to Michael Jackson but he rejected it.

“I don't know if it's true or not. I just don't know the answer to that,” Sevelle said. “It'd be interesting to find out. We could probably call Quincy and ask him, he might know.”

Sevelle considers Prince the greatest musician she's ever collaborated with - and she's worked with a heady bunch including “Burt Bacharach and Thom Bell and Nile Rodgers - you know, I've learned from all of these masters.”

She added: “With Prince, he's just the creme de la creme. He's a perfectionist in every way,” she said. “In hindsight I've felt like, 'Oh I wish I didn't take it for granted quite as much.' Maybe I took it for granted a little bit too much. I think experience teaches you to cherish the situations that are rare and wonderful. I knew it at the time, but I know it more now.”

In this photo combination, singers Apollonia Kotero, left, and Susannah Melvoin pose in front of a photo of Prince at Warner Music Group in Los Angeles on Friday, May 31, 2019. Kotero and Melvoin are among several artists who spoke with The Associated Press about their experience working with Prince in advance of the release of his posthumous album, "Originals," due out this month. (Photo by Mark Von Holden/Invision/AP)