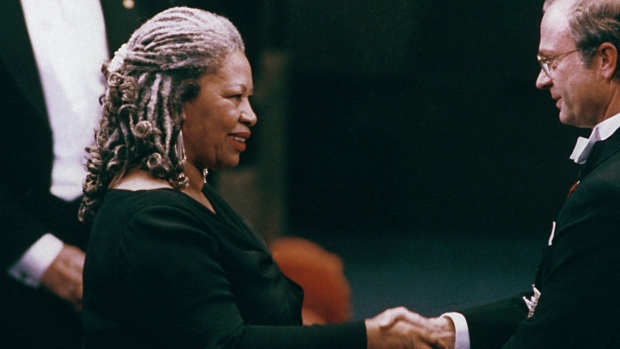 Highlights of reaction to her death:

“Toni Morrison was a national treasure. Her writing was not just beautiful but meaningful-a challenge to our conscience and a call to greater empathy. She was as good a storyteller, as captivating, in person as she was on the page. And so even as Michelle and I mourn her loss and send our warmest sympathies to her family and friends, we know that her stories-that our stories-will always be with us, and with those who come after, and on and on, for all time.” - former President Barack Obama, via Twitter.

“'If you surrender to the air, you can ride it.' Rest in paradise.” - Beyonce, on her website.

“'If there is a book that you want to read but it hasn't been written yet, you must be the one to write it,' Toni Morrison said. We are all so lucky to live in a world where she took her own advice and shared it with others.” - Hillary Clinton, via Twitter.

“The passing of Toni Morrison is a mandate to all others in the field to fulfil the high calling that her work and her life demonstrated. Her words, her wisdom, her undying love and commitment to her people are forever engraved in the pages of history, but her artistic, remarkable literary voice will be deeply missed.” - Rep. John Lewis, in a statement.

“Today, the world lost a storyteller of unmatched empathy, elegance and power. Toni Morrison's belief that language is the ”measure of our lives“ leaves an extraordinary, inspiring inheritance, and her beautiful writing will continue to be a blessing for generations to come.” - House Speaker Nancy Pelosi, via Twitter.

“'You wanna fly, you got to give up the shit that weighs you down.' Toni Morrison. I cannot imagine growing up in a world without her words. I pray you rest In Peace and in Power. We will celebrate you with endless gratitude and love. Always.” - Kerry Washington, via Twitter.

“Toni Morrison will be remembered as one of the greatest thinkers and storytellers in our history. She gave us all so much, and her work continues to give throughout time. Thank you, Toni Morrison.” - U.S. Rep. Alexandria Ocasio-Cortez, via Twitter.

“I just assumed Ms. Morrison would live forever. And in so many ways in so many hearts and minds and spirits, she will.” - filmmaker Barry Jenkins, via Twitter.

“I was very saddened to hear of the death of the great American novelist Toni Morrison, a giant of her times and ours. Her novel, Beloved, is a heartbreaking testimony to the ongoing ravages of slavery, and should be read by all. That her strong voice will now be missing in this age of the renewed targeting of minorities in the United States and elsewhere is a tragedy for the rest of us.” - Margaret Atwood, in a statement.

“Toni Morrison was a towering intellect, a brilliant scribe of our nation's complex stories, a heartbreaking journalist of our deepest desires, and a groundbreaking author who destroyed precepts, walls and those who dared underestimate her capacity. Rest well and in peace.” - former Georgia Democratic gubernatorial candidate Stacey Abrams, via Twitter.

“She was the best of us: our strength, our hope, and most importantly, our history. I grieve her passing though I know she will never, ever be gone.” - Walter Mosley, via Facebook.

“In the passing of Toni Morrison, we lost one of our greatest voices & storytellers. Holding close those touched by her being & her gift. Her work gave us power, hope & freedom. While our world shines a little less bright today, we know ”something that is loved is never lost.“ - U.S. Sen. Kamala Harris, via Twitter.

“If you look at the world as a brutal game, then you bump into the mystery of the tree-shaped scar. There seems to be such a thing as grace, such a thing as beauty, such a thing as harmony. All of which are wholly free and available to us.” Your life was our gift, #ToniMorrison“ - Ava DuVernay, via Twitter.

“Toni Morrison. While you have left the physical realm, the many treasures you left us will bear fruit for generations and generations. Your work has cascaded through my life deeply and simply...rest in power to a beloved icon.” - Tracee Ellis Ross, via Twitter.

“My heart hurts. Her greatness was absolute. Her words changed worlds. Her work always belonged to the immortal, and her name will never be forgotten.” - author Elizabeth Gilbert, via Facebook.

“Genius has moved on. She made me understand ”writer“ was a fine profession. I grew up wanting to be only her. Dinner with her was a night I will never forget. Rest, Queen.” - Shonda Rhimes, via Twitter.

“'If you are free, you need to free somebody else. If you have some power, then your job is to empower somebody else.' -Toni Morrison. Today we lost an American legend. May she rest in peace.” - U.S. Sen. Bernie Sanders, via Twitter.

“RIP Toni Morrison. This is a devastating loss to the world of words, to our understanding of power and it's reach, to the cultivation of empathy, to rich, nuanced, elegant storytelling. Her work was a gift to every one who had the pleasure of reading her.” - Roxane Gay, via Twitter.

“Aw man Toni Morrison taught me the word Rememory. RIP to a incredibly powerful and impactful woman.” - Chance the Rapper, via Twitter.

“Oh, no. So deeply saddened. Thank you for everything, Ms. Morrison.” - Celeste Ng, via Twitter.

“Toni Morrison was the first African-American woman to win a Nobel Prize. May she rest in power. #RememberHerName” - Billie Jean King, via Twitter.

“Her words were like mirrors to our collective souls. Like pillows to cushion the blows. Like mothers to wrap us in love. Like friends to hold our hands and see us through the darkness. #RipToniMorrison (heart) you. May we lift her up in the light of goodness and hold her there.” - Gabrielle Union, via Twitter.

“This is a hard day. #ToniMorrison” - Terry McMillan, via Twitter.

“#ToniMorrison has died. Just when we most need to hear her voice, she is gone. Thank you for the insights, the stories, and the poetry of your thought that have enriched us all these many years. Lay your burden down.” - Bette Midler, via Twitter.