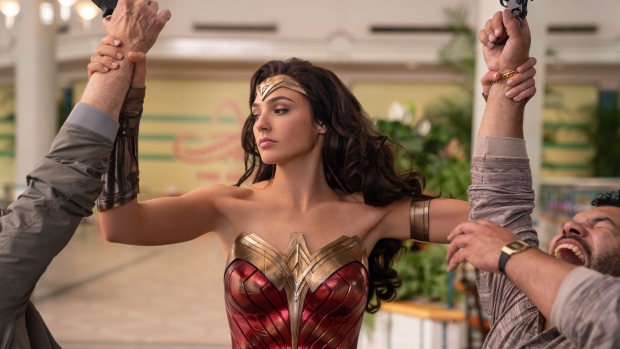 In its second weekend in U.S. theatres, “Wonder Woman 1984” earned an estimated $5.5 million in ticket sales according to studio estimates Sunday. It’s a 67% drop for the superhero sequel, which is simultaneously playing on 2,151 screens and streaming free for HBO Max subscribers.

“Wonder Woman 1984” has made $28.5 million to date from the U.S., where about 39% of theatres are open and most major markets, including New York, Los Angeles, Chicago, Boston, Philadelphia and San Francisco, are closed. Internationally, it added $10.1 million, bringing its global total to $118.5 million.

While $5.5 million would be a terrible second weekend for a $200 million movie in a pre-pandemic world, under the unique circumstances it was enough to top the domestic charts. In second place is Universal’s “The Croods: A New Age,” which saw a 25% increase in ticket sales in its sixth week in theatres. It’s made $34.5 million since it opened at Thanksgiving and is also now available to rent on premium video on demand.

Disney and Pixar’s “Soul,” which skipped U.S. theatres and is available for free for Disney+ subscribers, added $16.5 million internationally — a 114% increase from its opening in the same markets last weekend. The film featuring the voices of Jamie Foxx and Tina Fey has done particularly well in China, where it more than doubled its opening sum and added $13.7 million this weekend. The studio attributed the gains to strong social media reactions and word of mouth.