OTTAWA - The Harper cabinet is hoping to get ahead of a planned cyber protest by putting on a Canada-wide full-court press to persuade voters that less is more in the area of environmental protection.

Ten cabinet ministers are fanning out across the country this morning from St. John's to Surrey, B.C., selling basically the same theme -- that the government's re-branded resource development plan will create jobs and prosperity without devastating the environment.

The campaign comes as opponents darken their websites and gather on Parliament Hill to condemn the concept as a dangerous tilt away from environmental stewardship.

The government initiative is led by Natural Resources Minister Joe Oliver, who opened the campaign with a morning speech in Gatineau, Que., near Ottawa.

Oliver says the goal is to promote investment, business confidence and jobs while strengthening environmental standards.

Under the changes, Ottawa will limit the number, duration and scope of environmental reviews on major resource projects, such as the Northern Gateway pipeline that would take Alberta oil to the B.C. coast.

"Canadians understand that we do not have to choose between economic development and the environment," Oliver said in his morning speech. "It is not an either-or proposition.

"The fact is, our new plan will strengthen environmental safeguards, including tanker and pipeline safety. And for the first time, it will provide enforcement of environmental assessment conditions under the Canadian Environmental Assessment Act." 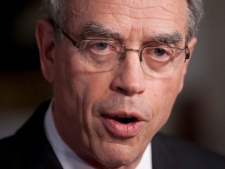 Minister of Natural Resources Joe Oliver speaks to reporters in Ottawa on Wednesday, May 30, 2012. (THE CANADIAN PRESS/Adrian Wyld)