A Toronto city councillor says the city should put the brakes on motorists who hold up traffic on major roads during rush hour, causing delays and headaches for fellow drivers.

Coun. Josh Matlow is proposing a $500 fine for motorists who are caught parking, idling or obstructing traffic in curb lanes or bicycle lanes during the morning and afternoon commutes.

The fine would apply to everyone from delivery truck drivers who stop in the curb lane to make a delivery or the average person who stops to run into a coffee shop.

The purpose is to ease traffic congestion at peak times and make the curb lane safer for cyclists.

Matlow said drivers can significantly slow down traffic flows when they stop in a curb lane, even if it's only for a few minutes.

He said a recent Organization for Economic Co-operation and Development study found that the Greater Toronto Area suffers from the longest work commute times in North America, costing the economy an estimated $3.3 billion per year.

Matlow floated several long-term solutions, including improvements to the city's public transit system and encouraging people to carpool and cycle to work.

Smaller measures can include a fine that would deter motorists from stopping or parking illegally on "arterial roads" during rush hour, Matlow said.

Matlow's motion hasn't been voted on at city hall. 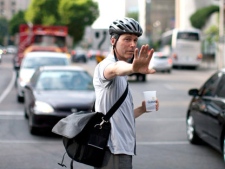 A member of the public directs traffic at a busy intersection during rush hour as traffic lights fail in downtown Toronto as a power outage leaves much of the city core without electricity on Monday July , 2010. THE CANADIAN PRESS/Chris Young