Four museums to get the axe, councillor says

TORONTO - A Toronto councillor says four city-run museums will get the axe in the next budget.

Coun. Joe Mihevc says cuts to cultural services will shut down Montgomery's Inn, the Gibson House, the Zion Schoolhouse and the Market Gallery.

The councillor is speaking out against the plan, saying the city should assess the museums over the next year.

Officials are weighing a long list of cuts meant to make up for a shortfall of more than $770 million in next year's budget.

Councillors have been asked to consider the sale of some city assets like city-owned theatres, zoos and museums. 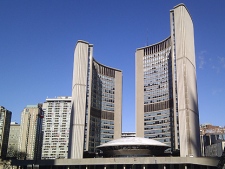