TORONTO - Werner Herzog's unflinching examination of a triple homicide in Texas, Morgan Spurlock's look at the curious culture of Comic-Con and Nick Broomfield's quest to learn more about politician Sarah Palin are among the documentaries coming to this year's Toronto International Film Festival.

And the spate of high-powered directors bringing docs to the festival doesn't end there. Jonathan Demme, Wim Wenders and Oscar winner Jessica Yu have also helmed documentaries they plan to whisk through a fest that will also feature docs from Academy Award winners Davis Guggenheim and Cameron Crowe.

"It was kind of crazy ... how many calls I was getting from veteran filmmakers telling me they had a new film to look at," documentary programmer Thom Powers said in a telephone interview Wednesday.

"It's kind of an insane embarrassment of riches."

It's perhaps fitting then that for the first time in its 36-year history, the festival will kick off with a documentary: Guggenheim's "From the Sky Down," which focuses on U2 during the tense period when the Irish rock superstars were crafting their inventive 1991 classic "Achtung Baby."

That marquee bit of scheduling is telling, Powers said.

"I think that it signifies the degree to which documentaries have become such a vital part of the culture."

And as far as Powers is concerned, that film will only be the first in a series of buzzy documentaries to make their debut at this year's festival, which runs Sept. 8 to 18.

Yet it wasn't merely the Oscar-approved pedigree of so many of these directors that drew Powers in, but the stories they were telling.

Last year, Herzog premiered his acclaimed doc "Cave of Forgotten Dreams," a 3D wonder that delved into the archaeological discovery of ancient etchings in a cave in Southern France.

His new film is a radical departure. In "Into the Abyss," the Oscar-nominated German filmmaker probes the psyche of a 28-year-old death-row inmate who was scheduled to die within eight days of his onscreen interview.

"Lots of crime stories are driven by trying to figure out who did it," Powers says of the film. "In this case, Herzog's not questioning the verdict in the case, but he's probing the impact of this tragedy on the lives of everyone it affected."

Demme's "I'm Carolyn Parker: The Good, the Mad, and the Beautiful," meanwhile, focuses on a New Orleans resident determined to rebuild her life in the city's lower ninth ward following the devastation of hurricane Katrina.

"It's a true labour of love project," Powers said, explaining that Demme trekked down to New Orleans with a camera months after the disaster before making regular trips for years afterward.

"When you first meet (Parker), it seems like a very daunting and even hopeless effort. Her house has no electricity, the walls are blown out, but year by year, you see her determination pay off, and she's quite a memorable character."

But Powers also stresses that this slate of documentaries isn't entirely dominated by such weighty fare.

"Super Size Me" director Spurlock's "Comic-Con: Episode IV -- A Fan's Hope" investigates the success of the behemoth San Diego fair. The film features interviews with such geek-culture icons as Stan Lee, Frank Miller, Joss Whedon and Kevin Smith while tracking a few specific, unique fest-goers, but does so without the condescension and irony that often characterizes Comic-Con coverage, Powers said.

Broomfield's "Sarah Palin You Betcha!" is similarly sensitive, according to Powers. The cheeky Brit filmmaker Broomfield, who has previously turned his lens on the likes of Courtney Love and Margaret Thatcher, travelled to Palin's hometown of Wasilla, Alaska along with co-director Joan Churchill, displaying his trademark doggedness in tracking down interviews with a cast of characters that includes the divisive politician's own parents.

But, Powers said, the film resists dismissing Palin as a punchline.

"She's a very powerful political force in the United States, and Broomfield I think supplies a very useful portrait to understand her," he said.

And a potentially under-the-radar flick that Powers sought to highlight is "Undefeated," which tracks the efforts of a football coach to overhaul the limping gridiron program at a hardscrabble high-school in inner-city Memphis, where the students are more likely to wind up in jail than in college.

"Mark my words: that's a film that's going to be an Oscar contender this year," Powers predicted boldly.

In fact, the sheer number of documentaries admitted to this year's fest ensures that there's something geared toward nearly every interest, from hockey (Alex Gibney's "The Last Gladiators") to dance (Wenders' "Pina") to film itself (Mark Cousins' "The Story of Film: An Odyssey," a 15-hour examination of 11 decades of cinema that sounds as though it will be "exhaustive" in every sense of the word).

"This is a documentary lineup that has something for everyone."

And documentaries aside, the film festival further fleshed out its lineup on Wednesday.

This year's instalment of the Vangard program -- which focuses on "young and cutting edge" offerings -- will feature the world premieres of Jean-Baptise Leonetti's "Carre Blanc," about a wealthy husband and wife still haunted by their shared childhood experience in a frightening orphanage, and Pen-ek Ratanaruang's "Headshot," which follows a strait-laced cop who wakes from a coma to find that everything he sees is upside-down.

Much of the festival's lineup is still yet to be announced. And Powers tantalizingly teases that upcoming announcements will feature more gems for music fans already enticed by the U2 doc, Crowe's "Pearl Jam Twenty" and Stephen Kessler's "Paul Williams Still Alive."

"We have a few more bombs to drop when it comes to music," he said.

But given that Guggenheim's U2 movie is kicking off a fest that will be further stacked with non-fiction films, could a bounty of enchanting documentaries become the story of this year's Toronto film festival?

"I thought documentaries were the story of last year's film festival," Powers responds with a laugh.

"For me, documentaries are always the story of the film festival. But one of the things that makes TIFF such a great festival is that there are several stories going on at once.

"There are several festivals under one tent." 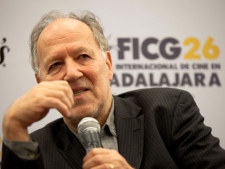