Southern Ontario residents hitting the road for Canada Day faced massive traffic jams on highways and at the border.

Ontario provincial police said traffic on highways 400 and 401 was the worst they've ever seen, even on a holiday weekend.

"Everybody. . . just wants to get out, and the weather plays a big factor, I think," he said.

There were no major collisions on OPP-patrolled highways in the region by mid-afternoon and Woodford said the delays were due to traffic volume.

Meanwhile, congestion at the border forced motorists to wait up to 3 1/2 hours.

The lineup was longest at the Lewiston Bridge in Niagara Falls, followed by the Rainbow and Peace bridges.

Woodford said some frustrated travellers were turning around and going home rather than spend the day in gridlock. 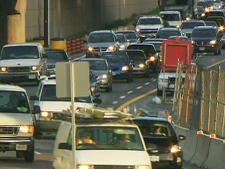