TORONTO - Homeless youth are getting unfairly ticketed by police in Toronto despite the fact that panhandling and squeegeeing have declined over the past decade, a new report suggests.

His research showed that 29 per cent of street youth surveyed reported panhandling and squeegeeing as their main source of income in 1999, a figure that dropped below three per cent 10 years later.

However, the number of tickets handed out under the Safe Streets Act, which was brought in 11 years ago to address aggressive panhandling and squeegeeing, "increased exponentially" over the past decade, from 710 tickets in 2000 to 15,224 in 2010.

"This suggests the Safe Streets Act is not being used to police a growth in aggressive panhandling and squeegeeing but rather is part of a broader strategy to criminalize homelessness," the report said.

The authors also found the tickets placed a large financial burden on the homeless because they called for potential fines of up to $500 for a first offence, with an average fee of $60. Many of those who couldn't pay ran the risk of ending up in jail.

"To issue fines to people who live in poverty seems to be a really weird way of dealing with the problem," said Gaetz, noting that about 99 per cent of the tickets went unpaid.

That didn't include the cost of processing tickets and amounted to 16,847 hours of police time.

The report made several recommendations, including that the Ontario government repeal the Safe Streets Act and instead invest in more effective strategies to end homelessness.

It also asked that the federal government ensure there are effective discharge plans and supports for all inmates leaving correctional facilities, and that the city of Toronto order a review of police practices in dealing with people who are homeless.

The study, co-authored by Bill O'Grady of the University of Guelph, drew on more than 240 interviews with street youth in Toronto in 2009, as well as a review of official statistics on Ontario Safe Streets Act tickets in Toronto over the past 11 years. 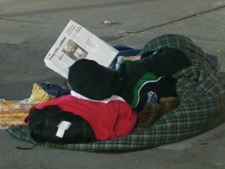 A homeless person appears in Toronto in this file photo.