Housing prices expected to be better than previously thought in 2011

CREA released a revised forecast Tuesday that estimates there will be 439,900 existing homes sold in 2011, down 1.6 per cent from 2010, but better than the nine per cent decline that CREA had forecast at the end of last year.

CREA's January sales data won't be released until next week. But recent reports on building permits and housing starts -- two indicators of how much new housing will be available for sale in future -- indicate a measured start to 2011.

Canada Mortgage and Housing Corp. reported Tuesday that the pace of new-home construction in Canada increased slightly last month, rising to 170,400 units, up from 169,000 in December on a seasonally adjusted annual rate.

That puts the country on a pace for about 10 per cent fewer housing starts than last year.

Krishen Rangasamy, an economist at CIBC World Markets said housing starts will likely soften over the coming months as home prices moderate and the Bank of Canada resumes its tightening cycle by mid-year.

A moderation in housing starts is a sign that supply is contracting in line with reduced demand, which could avoid an unhealthy glut of available houses on the market if demand declines when interest rate hikes are announced.

Some economists have warned that a combination of higher interest rates and new mortgage rules that go into effect March 18 could put a chill on demand in the later months of this year.

CREA predicted Tuesday that some sales that would have been made later in the year will likely occur in the first quarter, as a result of the new rules. A previous change in mortgage rules last year contributed to extremely strong first-quarter demand as buyers sought to beat the deadline.

"This is expected to produce a milder version of the volatility in sales activity that we saw last year which resulted from additional transitory factors," said CREA's chief economist Gregory Klump.

Last year, sales were also pushed ahead to the first part of the year as buyers in two provinces -- British Columbia and Ontario -- rushed to avoid a switch to the harmonized sales tax on July 1.

Those factors exacerbated the effect of interest rate hikes last summer and the market reached a trough in July.

Following last year's pattern, sales will likely be robust in the first quarter as buyers enter the market before the tighter mortgage rules take effect and then drop off in the second quarter.

However, CREA predicts that the market will gain traction in the second half of this year as economic conditions, job and income growth and consumer confidence improve, in contrast to 2010 when economic growth softened.

"Even though mortgage interest rates are expected to rise later this year, they will still be within short reach of current levels and remain supportive for housing market activity. Strengthening economic fundamentals will keep the housing market in balance, which will keep home prices stable," Klump said.

The Bank of Canada has forecast that housing will be a minor net negative for the economy this year, although it also cautions the market is a potential key downside risk for the economy.

The Royal Bank, CIBC and TD said this week they are raising the posted rate for a five-year closed mortgages by 0.25 percentage points to 5.44 per cent.

"The recent increase by a couple of the banks is exactly what we expected," Flaherty told reporters in the foyer of the House of Commons. "We're likely to see higher interest rates as we go forward because interest rates are still very low."

Last week, in the gloomiest report to date, Capital Economics analyst David Madani said house prices were just a few interest rate hikes away from a 25 per cent correction over the next three years.

However, a report released Tuesday by real estate agency Re/Max suggests the Canadian market has shown resiliency in the wake of major events in the past decade, such as the 9-11 terrorist attacks in 2001, the SARS health crisis in 2003 and the 2008-2009 recession.

The report said the market has self-adjusted as inventory dwindled during periods of reduced demand.

Through tumultuous times in the past decade, fewer real-estate listings led to higher home values, with national home prices increasing at an average of 6.82 per cent annually.

The market is on track to a similar realignment this year as the number of available homes trends downward, suggesting that the market is closer to seller's territory, in which prices spike said Christine Martysiewicz, a spokeswoman for Re/Max.

"Interest rates would have to go up significantly before we see any impact, and we wouldn't see an immediate impact," Martysiewicz said.

CREA forecasts that national sales activity will rebound in 2012 by three per cent to 453,300 units, which is roughly on par with the 10 year average.

It believes the market will continue to be relatively balanced between sellers, or supply and buyers, or demand, although the supply of new listings of existing homes is expected to trend higher. 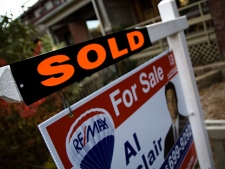 A 'Sold' sign hangs outside a home in Toronto's Beach community in this undated file photo. (CP24/Maurice Cacho)