TORONTO - The use of fur in fashion has long been a subject of contentious debate, but recent shows in fashion capitals including New York and Milan saw fur emerging as a major trend on fall/winter runways.

At Toronto's LG Fashion Week on Sunday, fur was front and centre once again at the opening night show of IZMA, the collaborative fur line from designer Izzy Camilleri and fashion journalist Adrian Mainella.

Stylewatchers eased into their sleek chairs along both sides of the runway at Fashion Week's latest new home at the Allstream Centre to take in the show. Several of those on hand accessorized their ensembles with fur stoles and coats, although it wasn't clear which items were real fur and which were of the faux variety.

As for the looks on the runway, the collection incorporated coyote, raccoon, beaver, red and grey fox in a variety of creations spanning from outerwear to accessories, most of which were paired with form-fitting cream or black leather or suede separates, including a sleek tailored pleated skirt and body-hugging high-waist trousers.

Select pieces also featured a mix of contrasting materials, for example a beaver vest paired with chunky metal chains. The extravagant closing number featured a one-shoulder asymmetrical dress with what appeared to be fanciful folds of tulle cascading the full length of the dress and into the train, accented by a subtle fur trim at the collar.

Mainella said Camilleri came to him two years ago while he was still hosting CBC's "Fashion File" and the two had a meeting where they discussed the future of Canadian designers in ready-to-wear.

Mainella said the pair started talking about how one of the few real luxury products coming out of Canada was fur, and they specifically discussed sustainable fur.

While Camilleri, an established design talent, is well known for her use of leather as a signature fabric, one of her most famous creations is a fox coat for Meryl's Streep character as fashion magazine editor Miranda Priestly in "The Devil Wears Prada."

Mainella said he sees fur as being green in part because of its longevity compared to other materials.

"People don't typically discard fur products as readily as they do cloth products, windbreakers, coats, synthetic sweaters. They usually keep them and pass them down."

Mainella said their aim with the collection was to look at ways to make fur more versatile and to incorporate it in fashion in a way that women could dress it up or down.

To that end, the pair have crafted pieces that have dual purposes: capelets that turn into skirts, or stoles into purses, he said.

Mainella said all of the pieces are handmade in Canada, and they are working in collaboration with the North American Fur Association.

While fur may be seeing a renaissance on the runway, it remains a source of contention particularly among those in the animal rights movement who are against its use in fashion.

Mainella said he believes the key is for everyone to be informed. He said the livelihood of trappers making a living from the fur industry is no different than the farming or livestock industry being supported through the purchase of food or leather goods.

"I'm not here to be the spokesperson for fur. I'm here to design a collection that I hope people really love and would like to wear," he said.

"For those who protest or speak to animal rights, I mean that's the beauty of this country ... you should be able to voice your opinion," he added.

"But at the same time, those who care to participate in purchasing things like fur and buying meat in their groceries or poultry or those who enjoy leather products, they should be able to freely do the same." 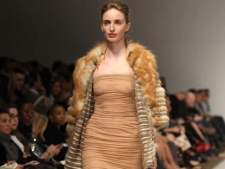 A model walks the runway for the IZMA show during Toronto Fashion Week Sunday, March 28, 2010. (THE CANADIAN PRESS/Darren Calabrese)