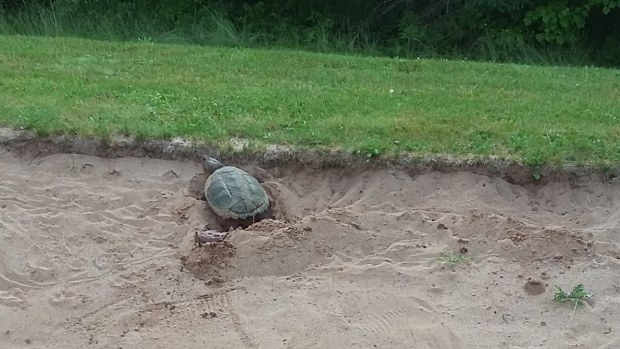 A snapping turtle named Shelley who has laid her eggs in the sand trap at the 7th hole for the second year in a row on the Debert Golf Course in Debert, N.S.is seen in this undated photo provided August 6, 2019. For the second year in a row, a bunker on a golf course in central Nova Scotia is off limits to duffers because it's become the ideal place to lay eggs for a resident snapping turtle. THE CANADIAN PRESS/HO, Mark Webb

HALIFAX - For the second year in a row, a central Nova Scotia golf course is home to an unusual hazard after a resident snapping turtle laid eggs in a bunker.

Debert Golf Course manager Mark Webb says the sand trap next to the seventh hole has been declared off limits after the turtle laid the eggs.

Webb says the turtle nicknamed Shelley was rescued from the side of a road last year by a friend and brought to the course, where it has apparently found a home.

The nine-hole course has several ponds that provide an ideal turtle habitat.

Webb says that after a hatching last September, he was able to help three of the baby turtles make it safely to a pond on the course.

Andrew Hebda, curator of zoology with the Nova Scotia Museum, says while snapping turtles often lay eggs in June, recent cooler springs have meant the eggs are being laid later in the summer.

Hebda says the current batch of eggs may not hatch until October, and if gets cooler earlier in the fall the hatchlings may not emerge until next spring.