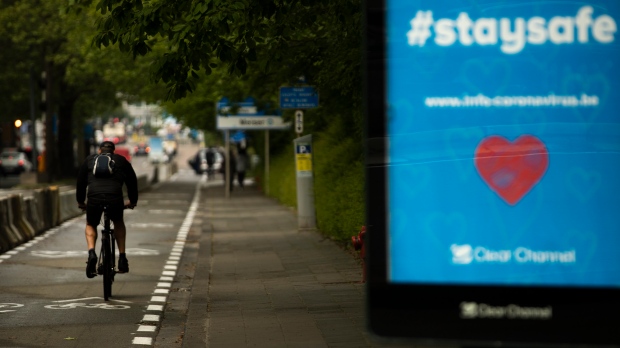 A man rides a bicycle along a new path designated only for bikes, during a gradual lifting of a lockdown to prevent the spread of the coronavirus, COVID-19, in Brussels, Monday, May 4, 2020. (AP Photo/Francisco Seco)

David Shellnutt and Cathy Watts want new cyclists to try and change the way they think before hitting the road.

Shellnutt and Watts are cycling advocates focused on helping Canadians stay safe as biking grows in popularity during the COVID-19 pandemic with people trying to stay active but physically distant. They also expect that more people will choose cycling as a commuting alternative to public transit as the weather warms up and the country continues to reopen.

“It's really important to do (cycle) safely and always be vigilant,” said Shellnutt, a Toronto-based lawyer that specializes in cycling collisions. “Cycling is fun, but car drivers in Ontario are very often careless and negligent.”

Watts, who is co-chair of Saskatoon Cycles, believes that an important safety step is for novice bikers to stop planning their route as if they were in a car - in other words, stay off of major thoroughfares.

“Take the residential, quiet roads. They're so quiet, you're going to feel so happy,” said Watts. “Figure out where you're going to have to cross the major arterial roads, where there's going to be a traffic light and a walkway for you to get across.”

Both Shellnutt and Watts say they've seen a visible increase in bike usage during the pandemic. To that end, Saskatoon Cycles wrote an open letter to city council asking that some roads be closed to cars so that there was more space for cyclists and pedestrians to co-exist while maintaining physical distance.

That anecdotal evidence is backed up by Brodie Wallace, the category merchandise manager for Mountain Equipment Co-op, one of the largest bike retailers in Canada. He says that across the country there has been a notable uptick in sales for bicycles and safety accessories like helmets, lights, and reflective bands.

Wallace says that during the first weeks of the pandemic kids bikes were the biggest sellers, suggesting parents were looking for something to keep their children active after schools closed. But as lockdowns have worn on, road bicycles in adult sizes have become more popular.

“I think that any time that we can help a Canadian become more active outside, whether that takes the form of commuting, as opposed to transit, it's a wonderful thing,” said Wallace from Vancouver. “It's a wonderful thing to see people use transit instead of cars because it's much less pollution.”

Shellnutt leads workshops for cyclists across southern Ontario on what to do in the event of a collision, helping them understand their legal rights with an eye on safety. With the pandemic limiting public gatherings, Shellnutt is hosting a virtual workshop with the Guelph Coalition for Active Transportation on Thursday.

He says the next step is to gather information as quickly as possible to help the cyclist access health care and lost wage benefits.

Finally, Shellnutt says an injured cyclist should try to find out who hit them so they can pursue them in court, if necessary.