Eyes, ears, whiskers can give away if cats are in pain: study 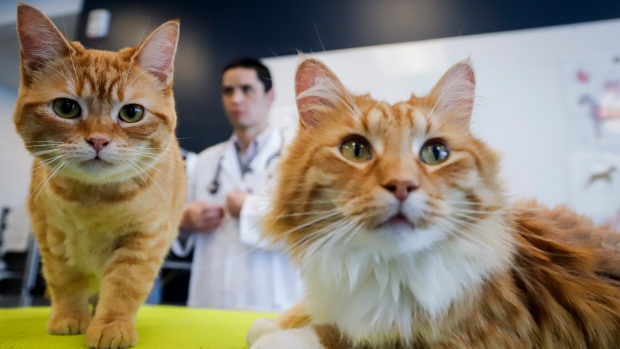 CALGARY -- Don't let their peaceful demeanour, aloof expression or apparent good humour fool you -- your favourite feline friends might be keeping a secret.

A study by professors at the University of Calgary and the University of Montreal says that while a cat may be notoriously good at hiding its pain, it's possible to look at its face to determine if it's suffering.

"We're looking at their ears, their eyes, their whiskers, their muzzle and the position of their heads. In combination, it gives us a pretty good idea if cats are in pain or not," said Dr. Daniel Pang, an associate professor of anesthesia and analgesia in the University of Calgary's faculty of veterinary medicine.

"Their ears start off in a nice forward position when the cat is comfortable. If they become more painful, the ears start to rotate backwards to their tail and they start to flatten off as well.

"With their eyes, instead of having nice, open round eyes they start to squint and eventually their eyes will close altogether."

As well, the muzzle and whiskers of a cat in pain will tense and its head will slouch below its shoulders.

The study developed a feline grimace scale, which can be used by veterinarians or cat owners. Each facial indicator is given a score of zero for no signs of pain, one for moderate signs or two for obvious signs. If the total score is over a certain threshold, the cat is likely to be hurting and pain relief should be considered.

"It's something that veterinarians can apply very, very quickly -- we're talking seconds rather than even minutes or hours," Pang said.

Cats are often underprescribed pain medicine because they are so hard to read, he said.

"As veterinarians, we find it hard to identify pain in cats and because of that, it's hard to make a decision or to make the right decision sometimes as to when we should be giving pain relief."

The study, by Pang and Dr. Paulo Steagall at the University of Montreal, was published last month in Scientific Reports.

Pang said traditionally it has been easier to determine if a dog is in pain because owners spend a lot more time with their canines and can assess when something is wrong.

"With cats sometimes it's hard to tell if they even care that you're there, so the signs are just not as obvious."

This report by The Canadian Press was first published Jan. 17, 2020