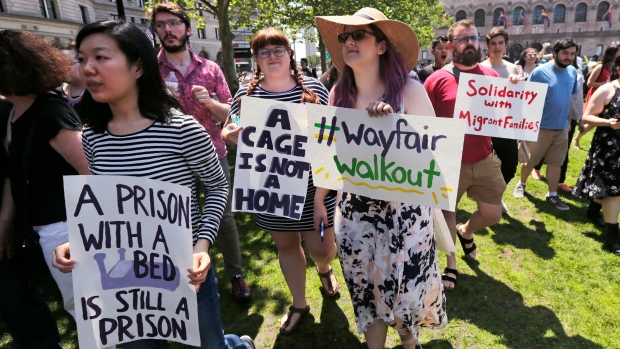 Employees of Wayfair march to Copley Square in protest prior to their rally in Boston, Wednesday, June 26, 2019. Employees at online home furnishings retailer Wayfair walked out of work to protest the company's decision to sell $200,000 worth of furniture to a government contractor that runs a detention center for migrant children in Texas. (AP Photo/Charles Krupa)

BOSTON - Employees at online home furnishings retailer Wayfair walked out Wednesday to protest the company's decision to sell $200,000 worth of furniture to a government contractor that runs a detention centre for migrant children in Texas.

The protest triggered a broader backlash against the company, with some customers calling for a boycott. Several hundred people joined the protest at a plaza near the company's Boston headquarters, a mix of employees and people from outside the company.

More than 500 employees at the company's Boston headquarters signed a protest letter to executives when they found out about the contract. Wayfair refused to back out of the contract but told employees Wednesday morning that it would donate $100,000 to the Red Cross.

“Last week, we found out about the sale and that we are profiting from this. And we are not comfortable with that,” said Tom Brown, 33, a Wayfair engineer at the protest. “For me personally, there is more to life than profit.”

Democratic presidential candidates Elizabeth Warren and Bernie Sanders both said they stood by the Wayfair employees who are protesting, as did Congressional Rep. Alexandria Ocasio-Cortez of New York.

Wayfair's stock initially slipped more than 5% Tuesday as word of the walkout spread. On Wednesday, the stock rose about 1%.

The protest comes amid a new uproar over revelations of terrible conditions at a Border Patrol facility in Clint, Texas, first reported by The Associated Press , including inadequate food, lack of medical care, no soap, and older children trying to care for toddlers. Emotions were also running high one day after photos published by the Mexican newspaper La Jornada and distributed worldwide by the AP showed the bodies of a migrant father and his young daughter who drowned while trying to cross the Rio Grande from Mexico to enter the United States without legal permission.

The unprecedented surge of migrant families has left U.S. immigration detention centres severely overcrowded and taxed the government's ability to provide medical care and other attention. Six children have died since September after being detained by border agents. As the controversy grew, the acting head of U.S. Customs and Border Protection resigned Tuesday, though he did not give a reason for leaving.

In a letter to the employees, Wayfair leaders said that it's standard practice to fulfil orders for any customer acting within the law.

“We believe it is our business to sell to any customer who is acting within the laws of the countries within which we operate,” said the letter.

Wayfair said it would have no further comment on the protest.

Wayfair sold the beds to Baptist Children's Family Services, a non-profit with federal contracts to manage some of the camps along the border.

“We believe youth should sleep in beds with mattresses,” the organization said in a brief statement.

Madeline Howard, a product manager at Wayfair, said company leaders had held a town hall earlier this week to listen to employee concerns but would not budge on their stance.

She said the company's donation to the Red Cross did not satisfy the demands of the employees, who had asked that the profit from the sale - about $86,000 - be donated RAICES, a non-profit that is the largest immigration legal services provider in Texas.

In a statement, the Red Cross said it was “grateful for Wayfair's generous donation.” The organization said it would put the funds toward “the increased aid we have provided for the past six months to community-based organizations helping with the border crisis in Texas, Arizona, and New Mexico.”

Brown, the Wayfair engineer, said there is no one answer on what the company policy should be, with some employees calling for the company to stop providing for the detention centres altogether, and others arguing it would be enough for Wayfair to forego profits from such sales.

Mimi Chakravorti, executive director of strategy at the brand consulting firm Landor, said Wayfair must decide whether the damage to their brand from the controversy will ultimately prove more costly than foregoing a $200,000 contract.

“Unfortunately, they are not going to able to get out of this without being burned on one side or the other,” said Chakravorti. “Is it about moral standards? Or is it about the bottom line dollars, and being able to sell to anyone in a legal way?”

Other companies have also been drawn into the controversy over the Trump administration's immigration policies.

Last year, American Airlines and United Airlines said they asked the government not to put migrant children who have been separated from their parents on their flights. Employees have protested work by Amazon and Microsoft to assist police agencies and federal immigration agents with facial recognition and other tools. Microsoft executives defended the company's immigration contract despite a protest letter that circulated through the company over the summer.

The children's magazine Highlights jumped in Tuesday, with CEO Kent Johnson posting a statement on Twitter condemning the separation of families at the border and calling for “more humane treatment of immigrant children” at detention centres.

The country's politically polarized atmosphere has become a minefield for many businesses as workers increasingly take on their employers for issues they care about.

At Google, employees walked out of their offices last year to protest the tech company's mishandling of sexual misconduct allegations against executives. And workers at Amazon.com Inc. publicly published a letter addressed to CEO Jeff Bezos earlier this year to push the online shopping giant to reduce its reliance on fossil fuels.

“This is new territory for many organizations,” Gilson said, adding that companies need to strive to ensure employees feel they are heard before a controversy spills out into public view.

“Why do people feel they have to take drastic action?” Gilson said. “How was the conversation initially managed? Is the culture, 'Yeah, thanks Johnny,' and eye-rolling and sighs?”