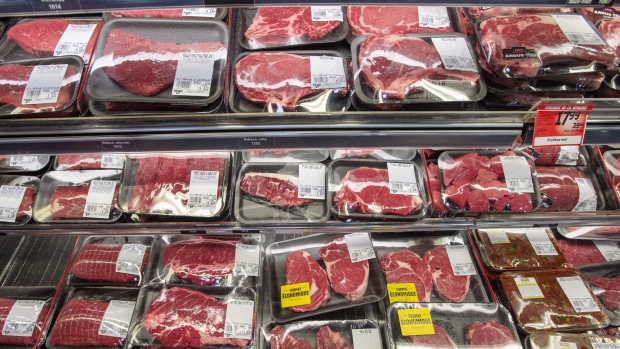 Cuts of beef are seen at a supermarket in Montreal on June 26, 2019. A Canadian scientist who co-led a study that challenges well-worn advice to limit meat consumption is responding to criticisms he should have disclosed past ties to the global meat and food industry. THE CANADIAN PRESS/Ryan Remiorz

HALIFAX - A Canadian researcher who co-led a study that challenges well-worn advice to limit meat consumption has responded to criticisms he should have disclosed past ties to the global meat and food industry.

Dalhousie University's Bradley Johnston said Saturday that he followed the disclosure rules of the Annals of Internal Medicine, which published the work Sept. 30. Those rules required the report's panel of 14 researchers from seven countries to reveal outside funding received within three years.

The Halifax professor and epidemiologist said the last time he received money from the International Life Sciences Institute, an industry trade group, was almost five years ago, and that he has cut all ties since.

“We seek to be totally independent of industry and in fact we are,” Johnston said in an interview the day after the New York Times delved into his background.

“Three years is a standard used by the ICJME (International Committee of Medical Journal Editors) and many guideline groups, and my declaration was accurate, and there is no undisclosed conflict.”

However, a professor of nutrition and food studies at New York University said that while Johnston followed the letter of the disclosure rule, he “ignored its spirit.”

Marion Nestle said the report's methodologies and conclusions on red meat are similar to Johnston's industry-funded work on sugar consumption, which also deemed the evidence to cut intake as weak. The Annals of Internal Medicine published that study in December 2016.

“It is always better to err on the side of more disclosure, not less,” Nestle wrote in an email.

“This one would ordinarily be in a grey area, but because the sugar study was so similar in approach, analysis, and conclusions, it would have been better to disclose.”

Nestle, the author of “Unsavory Truth: How Food Companies Skew the Science of What We Eat,” said that while the International Life Sciences Institute lists itself as an independent think tank, “it is supported by a large number of food and beverage companies. More important, it represents food-industry interests in the United States and internationally.”

The institute lists its members and supporting companies in 2015 as including McDonald's, Coca-Cola, and Cargill, one of the largest beef processors in North America.

Nestle said the journal editor should add further background to the disclosure information already published in the Annals of Internal Medicine.

“They should issue a correction, not that anyone will ever see it,” she wrote.

The panel of scientists in the red meat study concluded evidence that links the food to cancer, heart disease and other bad health outcomes is weak.

They wrote that if there is a health benefit to giving up meat products, it's small.

Gordon Guyatt, a professor at McMaster University, has said that given the increased risks are slight and uncertain, cutting back wouldn't be worth it for people who really enjoy meat.

The team used an evaluative system known as GRADE to assess the evidence provided by previous dietary studies, and looked at how inclined most people actually were to forsake red meat for their health.

Dr. David Jenkins, professor of Nutritional Sciences and Medicine at the University of Toronto, said in an interview that the issue of Johnston's non-disclosure of past ties is a minor matter.

“The critiques should focus on the work itself,” said Jenkins, who faults the work for failing to consider environmental and animal welfare arguments to reduce meat consumption.

Jenkins fears the work could further confuse the general public and other health professionals, taking special issue with the publication's headline that declared: “New guidelines: No need to reduce red or processed meat consumption for good health.”

He is among a group of scientists known as the Physicians Committee for Responsible Medicine who pressed the Annals of Internal Medicine for a retraction, arguing the conclusions would put some “at risk for major health problems.”

“The evidence against us giving up meat may be weak, but it's there. And the evidence for us eating more meat is not there,” he said.

The Harvard University school of public health also issued a release this week critical of the study.

The school said there is a large body of evidence indicating consumption of red meat - especially processed red meat - is associated with higher risk of type 2 diabetes, cardiovascular disease, certain types of cancers and premature death.

“Existing recommendations (on food consumption) are based on solid evidence from randomized controlled studies,” said the release.

This report by The Canadian Press was first published Oct. 5, 2019