One person is dead following a fatal collision that closed the eastbound lanes of the QEW at Erin Mills Parkway for the morning rush hour.

The serious crash occurred just before 7 a.m. and had the highway closed until noon.

Police say a late model Honda Accord rear-ended a transport truck on the highway, killing the driver of the car as a result.

The victim was pronounced dead at the scene after an air ambulance was called and landed on the roadway. The chopper clipped communication lines that were strung between posts at the side of the QEW, but this didn't affect the aircraft's flight.

Motorists dealt with significant traffic delays in the area while the highway was closed. 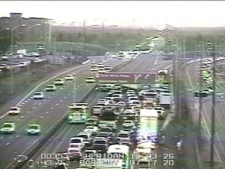