"He got off to a really good start and he has seemed to plateau a little bit," Forum Research President Lorne Bozinoff, told CP24.

Mayor Rob Ford is still a pretty popular guy in Toronto, but a new poll suggests his support may be slipping.

The latest numbers from Forum Research show that 57 per cent of Torontonians support the job Ford is doing. That's a three point drop from a similar poll conducted in February.

When it came to issues city residents were also split.

Approval for physically separating bike lanes enjoyed the highest level of support with 72 per cent of respondents voting in favour, while having public festivals in city parks rather than on city streets (65 per cent) and the privatization of garbage collection (52 per cent) also enjoyed majority support.

The idea of instituting toll roads to help pay for the Sheppard subway extension, as suggested by Ford-picked transit advocate Gordon Chong last week, proved divisive. Just 35 per cent of respondents said they would support tolls.

"Opinions could change, but right now that's a non starter with the public," Bozinoff said.

The poll surveyed 1,050 randomly selected Toronto residents on June 1. It is considered accurate to within 3.1 percentage points, 19 times out of 20. 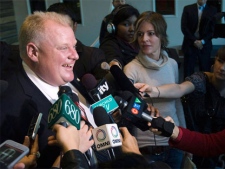