TORONTO - A quiet weekend pledge to scrap a gas-fired plant west of Toronto forced Ontario's election-minded premier onto the defensive Sunday as his political rivals slammed the move as a crass attempt at grabbing votes.

In a barely publicized announcement on Saturday, four local Liberal candidates made the promise to stop construction of the 280-megawatt natural gas-powered facility in Mississauga, Ont.

At a campaign stop, Premier Dalton McGuinty gamely defended the decision amid questions about the timing of the low-key announcement that came less than two weeks before the Oct. 6 vote.

"It's important for us, as a political party, to listen to the arguments made by the community and I thought they were pretty compelling," McGuinty said.

"Before the campaign started, I was asked about this (and) I said, 'I'm keeping an open mind; we're listening to the community,' and we've listened."

Residents have long opposed the Greenfield South plant, which straddles the Toronto-Mississauga border, saying it was too close to homes, schools, a hospital, a hospice and a large mall.

McGuinty said the community had changed significantly since the plant was proposed in 2005, which was why his party had changed tack.

"This is a government that is panicked, that is desperate and is on the run," said a feisty Hudak, who made an impromptu stop at the plant site Sunday.

"Chickens with their heads cut off would have more stability on energy decisions than these guys."

He added that if McGuinty was serious about listening to local communities, he would also halt plans for wind power in areas where residents have cited health concerns.

According to information from the Ontario Power Authority, construction has already begun on the plant site and major equipment already ordered.

For their part, the New Democrats who used the day to roll out the cost of their platform, said the Liberal move was more about saving seats than it was about deciding where to place power plants.

"It shows that the Liberal plans have not been very well thought out, and when it comes to their seats being threatened by these poorly thought-out plans, then they're prepared to take action," NDP Leader Andrea Horwath said in Toronto.

"What they're not telling us, though, is what's in that contract: What's it going to cost to change the location (and) where is the new location?"

McGuinty wouldn't discuss the cost of moving the plant or where it might go.

"We're talking about what it is we can do to relocate these kinds of things, so that's a subject of continuing conversation," he said.

The Liberal pledge to kill the plant -- being built by Eastern Power -- comes less than two months after Environment Minister John Wilkinson announced an updated review of the approval for the facility would take place to account for recent developments. 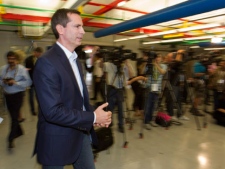