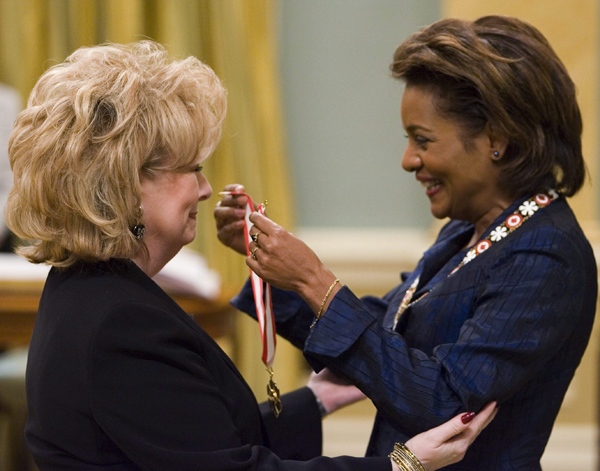 Former journalist and diplomat Pamela Wallin is invested to the Order of Canada as Officer by Gov. Gen. Michaelle Jean during ceremony at Rideau Hall, in Ottawa, Friday, Feb. 22, 2008. (Fred Chartrand / THE CANADIAN PRESS)

OTTAWA - Two television journalists, an Olympic hero and a covey of Conservative partisans were named to the Senate in Stephen Harper's biggest volley of patronage since he became prime minister.

Most of those appointed to the Senate were not household names, but well-connected Tories such as defeated candidates, campaign organizers and party fundraisers.

The government says it's still committed to democratizing the Senate and that nominees are expected to resign and run for their seats if their province ever introduces elections to the upper chamber.

Only Alberta and Saskatchewan have plans for elections. Being a Saskatchewan appointment, Wallin might wind up being among the first to give up her seat.

"My guess is she would be happy to run," a government official said.

Wallin was a prominent figure at CTV and CBC, hosting programs ranging from Canada AM to newscasts and game shows, before she was named consul-general to New York by the former Liberal government.

Duffy has been a fixture on Parliament Hill for almost 35 years, and he hosted what proved to be the last instalment of his daily political talk show last week on CTV.

Greene Raine helped break the European stranglehold on downhill skiing in the 1960s, most famously by winning gold and silver medals at the 1968 Winter Olympics. She was named Canada's female athlete of the 20th century in a vote by members of The Canadian Press.

The B.C. sports icon, who helped develop the Whistler ski site, will take a seat in Parliament one year before the area hosts the 2010 Winter Olympics.

There is no more sought-after patronage pork than a Senate seat and Harper and his ministers were inundated by Conservatives clamouring for a favour.

Many of the other appointments made Monday went to influential Conservative partisans.

Party stalwarts Irving Gerstein, Suzanne Duplessis and defeated Newfoundland MP Fabian Manning are among the other prominent Conservatives going into the upper House.

Harper has always believed senators should be elected and he refrained from filling a growing number of vacancies while trying to make the upper chamber more democratic.

Those efforts ran into roadblocks erected by the Liberals in Parliament and by the governments of Ontario and Quebec.

Harper's opponents say that without a constitutional amendment, his reform plan would create a chaotic hodge-podge in Parliament and cause more problems than it solves.

At present the Senate only rarely blocks or overturns decisions made in the democratically elected House of Commons.

The prime ministers' political foes say a quasi-elected chamber -- where some members are chosen by voters and others aren't, depending on their appointment date and province -- could overpower the elected one.

With Eastern provinces drastically over-represented in the Senate, it would also give that half of the country far more electoral clout in a more-powerful chamber.

Harper's timing, just before Christmas when most Canadians are preoccupied with holiday cheer rather than politics, suggests the government wasn't anxious to showcase the appointments.

Opposition parties questioned whether Harper has the political legitimacy for a patronage spree, having averted the defeat of his minority government only by suspending Parliament until the new year.

They also questioned the timing of the announcement -- given the dire state of the economy and public finances. They said filling those 18 seats will cost taxpayers $6 million a year.

"Mr. Harper should be focused on the 71,000 Canadians who lost their jobs last month. These 18 patronage appointments show that when it comes to job creation, Mr. Harper cares more about rewarding his Conservative friends than creating jobs for Canadians."

The prime minister himself has admitted he takes no joy in having to stack the Senate, a move seen by some as tantamount to waving a white flag of surrender on his dream of reforming the chamber.

He noted in a recent TV interview that he waited three years before filling most of the vacant seats, while his opponents in the Senate thwarted his plans to move forward.

Until now Harper had appointed only two senators -- Alberta's Bert Brown, victor of a Senate election in his province, and Michael Fortier, who got the plum so that Harper could have a minister from Montreal in his first-term cabinet.

Initially, the prime minister had hoped to appoint only senators who had won election. Shortly after taking power in 2006, he introduced a Senate election bill and another limiting senators to eight-year terms.

But his reforms ran into a brick wall in the minority Parliament and in a number of provincial legislatures -- particularly in Quebec and Ontario. They insisted no changes could be made without a formal constitutional amendment approved by at least seven provinces.

While Harper waited for reforms to materialize, the 20 remaining Conservative senators found themselves increasingly over-burdened. They complained they didn't have enough bodies to fill seats on committees, much less to challenge the dominance of the 58 Liberal senators who, the Tories contend, have been dragging their feet on important legislation.

The last straw was the threat by the three opposition parties to defeat the Tories in the Commons and replace them with a Liberal-NDP coalition government, propped up by the Bloc Quebecois.

"We're now faced with a very simple choice," Harper said after that furor.

"Does the government Canadians elected appoint those senators or are they going to be appointed by a coalition that nobody elected?"