After being fired by Sportsnet, Cherry says he refused to backtrack on poppy comments 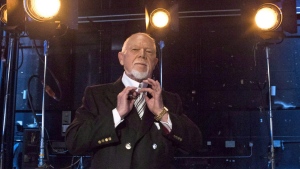 Don Cherry poses for a photo in Toronto on Monday, March 10, 2014 . Don Cherry says he isn't moving on from "Coach's Corner" just yet. The colourful and often outspoken Cherry immediately took to social media to state he was told by his bosses at Sportsnet that he'd be returning next season. THE CANADIAN PRESS/Chris Young

Fired Coach’s Corner host Don Cherry says he could have stayed on the program had he agreed to walk back comments he made about immigrants, but he refused.

“Hey listen, I’m not whining or anything. I’m just saying, I could have stayed on if I wanted to and knuckled under and turned into a simp, but that’s not my style. I’d rather go out with my shield,” the 85-year-old told radio station Newstalk 1010 in an interview Monday night.

The long-time hockey commentator was fired from his role at Coach’s Corner over his comments last Saturday targeting immigrants who he said did not properly honour Canada’s veterans, broadcaster Sportsnet confirmed Monday.

On his program on Saturday, Cherry said that new people in his hometown of Mississauga and those who live in downtown Toronto don’t wear poppies around Remembrance Day. He contrasted them with those who live in "small towns."

On Monday afternoon, which happened to be Remembrance Day, Sportsnet President Bart Yabsley said "following further discussions with Don Cherry after Saturday night's broadcast, it has been decided it is the right time for him to immediately step down."

"During the broadcast, he made divisive remarks that do not represent our values or what we stand for," Yabsley said.

Cherry has hosted the Coach’s Corner program since 1982.

In his interview Monday night, Cherry said that “If I had gone on and said a few things and done a few things I definitely would have been back.”

He denied that his comments targeted any particular group.

He added he stands by his insistence that everyone should wear a poppy.

“What I meant was everybody, everybody and I mean everybody should be wearing a poppy to honour our fallen soldiers who gave their lives for our way of life.”

However he acknowledged that after he made his comments, he realized that people would likely see things differently.

“Once you say ‘you people’ you know you’re in trouble,” Cherry said.

Canada's broadcast watchdog was inundated with so many complaints about Cherry's remarks that on Monday it asked the public to stop sending them.

Cherry’s comments were panned by most on social media, including the mayors of most large Canadian cities, and provincial and federal politicians.

Sportsnet, the National Hockey League and McLean, each apologized for Cherry’s comments, with McLean saying he felt bad he did not interject while Cherry was speaking.

Cherry said Monday night that he was “disappointed” by McLean’s apology.

“The only thing I can say about that is I’m disappointed and I think anybody who knows Ron is disappointed,” Cherry said. “I still consider him as a friend. I’m not going to dump on him. He’s got his job and that’s the way it goes.”

In his 37 years with Coach’s Corner and in other public appearances in support of that role, Cherry rarely shied away from revealing his controversial politics.

“I'm wearing pinko for all the pinkos out there that ride bicycles and everything," he said at the event, later saying that left-leaning politicians in the city and their supporters “scrape the bottom of the barrel.”

In 2013, he said that he didn’t believe female reporters should be able to access locker rooms of professional male athletes.

In 2016, in the wake of U.S. President Trump’s election, he told “left wing kook” Americans not to move to Canada.

In 2017, he criticized the kneeling protests that circulated through the National Football League, where players kneeled during the Star Spangled Banner to protest the treatment of black people by American police, mocking media coverage of the movement.

The CBC, which airs Hockey Night in Canada but no longer owns the rights to the program, said Monday it respected Sportsnet's decision.

"Don Cherry's remarks on Saturday night were divisive, discriminatory and offensive, and we respect Sportsnet's decision that this is the right time for Don to step down."

Also Budweiser, which owns Labatt Breweries who sponsor Coach's Corner, said they voiced concerns about Cherry's comments after they were made on Saturday.

"The comments made Saturday on Coach's Corner were clearly inappropriate and divisive, and in no way reflect Budweiser's views," Todd Allen, Labatt's vice president of marketing, said Monday. "As a sponsor of the broadcast, we immediately expressed our concerns and respect the decision which was made by Sportsnet today."

Cherry called broadcasting “the toughest business in the world” because “you make one little slip and you’re gone.”

“You’ve got to be tough in this business and if you’re tough you can’t whine.”

Don Cherry poses for a photo in Toronto on Monday, March 10, 2014 . Don Cherry says he isn't moving on from "Coach's Corner" just yet. The colourful and often outspoken Cherry immediately took to social media to state he was told by his bosses at Sportsnet that he'd be returning next season. THE CANADIAN PRESS/Chris Young