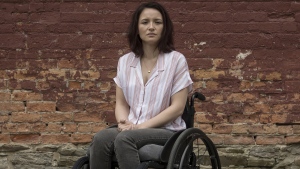 Danielle Kane, a shooting survivor from the Danforth attack, poses for a photograph at Liberty Village Park in Toronto on Friday, July 12, 2019. THE CANADIAN PRESS/Tijana Martin

TORONTO - A woman who barely survived a mass shooting in Toronto's Greektown applauded Liberal Leader Justin Trudeau's proposal to ban assault rifles on Friday, but said handguns such as the one that left her paralyzed should also be prohibited.

Danielle Kane was one of 13 people wounded when a gunman went on a shooting rampage on the Danforth on July 22, 2018. Two people - Reese Fallon, 18, and 10-year-old Julianna Kozis - were killed.

Trudeau announced his gun control policy Friday in Greektown, not far from the site of the shooting.

“I think anything less than what he is proposing is simply not acceptable because no one should have to live through what I'm living through right now: the pain, the misery, the burden, no one should,” said Kane, who spent 11 days in a medically induced coma and two months in hospital learning to live as a paraplegic.

In addition to his pledge to ban assault rifles, Trudeau also promised to allow municipalities the right to ban handguns - a move that left Kane feeling hopeful.

But the announcement disappointed some other family members of the Danforth victims.

“If you don't ban handguns now, you'll pay for it later,” said Ken Price, speaking on behalf of the group Danforth Families for Safe Communities, which includes the families of nine victims of the shooting. “Handguns don't really belong in the hands of private citizens.”

His daughter, Samantha Price, was at a birthday party on the Danforth with seven friends when Faisal Hussain, armed with a handgun, opened fire indiscriminately. Four of her friends were shot, and one of them - Fallon - was killed.

Police have said the handgun used in the Danforth shooting was stolen from a gun shop in Saskatchewan years ago.

“We've been asking for that, even though that wasn't the weapon that affected us,” he said.

But he said the community also wants to see a federal ban on handguns.

“To push that to municipalities, I don't understand that,” Price said. “If Brampton says yes and Toronto says no, how is that helpful?”

Price did say, however, that the families appreciated Trudeau for making gun violence an election issue.

Mayor John Tory said Trudeau's proposals were a step in the right direction, but he also called for a federal ban on handguns

“We will not stop continuing to advocate, as overwhelmingly endorsed by Toronto city council, for a national handgun ban,” Tory said.

“There's nobody who argues it won't do some good if we really believe a big part of the problem is the easy availability of too many handguns in the city of Toronto and elsewhere for that matter.”

Danielle Kane, a shooting survivor from the Danforth attack, poses for a photograph at Liberty Village Park in Toronto on Friday, July 12, 2019. THE CANADIAN PRESS/Tijana Martin