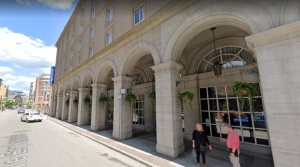 The Novotel hotel on The Esplanade is shown in this image taken from Google Maps. The city has leased the site for use as a temporary shelter.

The city has moved out the last remaining residents of a temporary downtown shelter hotel as it prepares to turn the property back over to its owners.

The Novotel location at 45 The Esplanade was leased by the city in February 2021 in order to create much-needed additional shelter space at the height of the pandemic.

“Since October 12 – when new admissions to the site ceased – the City and Homes First Society worked with residents on individualized relocation plans, which included either transition to permanent housing or a move to another shelter,” the city said in an email Tuesday, calling it a “collaborative process.”

The city said additional staff were brought in to work with residents on housing plans and regular ID and tax clinics were offered onsite.

“Support was provided to residents with their moves on the agreed-upon dates. Relocations were voluntary and residents were able to decline referrals offered, if they chose to,” the city said.

Community workers expressed concern last week that the closure of the temporary shelter site was creating chaos for some residents who might not have anywhere to go and could be left in the cold just as winter settles in.

All residents had been cleared from the property by around 2 p.m. Tuesday.

According to the city, 168 were referred to other shelters, 44 were moved into housing, 13 were discharged to other locations, such as health facilities or long-term care facilities, and 26 people left on their own without referrals.

The city has acknowledged that the shelter system is facing extraordinary pressures and has recently made more space by reducing the physical distancing that was put in place during the pandemic in order to curb the spread of infection.

Approximately 8,200 people use the city’s shelter system each night — a number which puts it roughly at total capacity.

The Novotel hotel on The Esplanade is shown in this image taken from Google Maps. The city has leased the site for use as a temporary shelter.