Ford to make announcement with health and children and women ministers 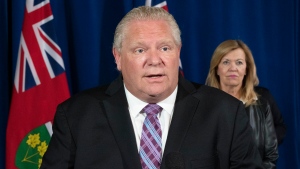 Ontario Premier Doug Ford and his ministers for health and women and children's issues will make an announcement at Queen's Park this afternoon, as the government's back to school plan comes under sustained fire from educators and parents.

Ford will be joined by Deputy Premier and Health Minister Christine Elliott and Associate Minister for Women's and Children's Issues Jill Dunlop.

They are set to speak at 1 p.m. and their remarks will be streamed live on CP24.com.

Ford's public appearances over the last few days have been dominated by talk about his government's $309 million back-to-school plan, which calls for high school students in urban areas to be cohorted in groups of 15 on alternating days, but elementary class sizes to remain the same, with mask use.

Parents and teachers say the lower grade classrooms must be made small enough to allow at least some physical distancing, something epidemiologists urged in a recent report published by SickKids Hospital.

Opposition parties, education unions and nearly 160,000 parents who signed a petition as of Thursday morning have said more money must be spent to ensure smaller class sizes and physical distancing between students in class.

Yesterday, Ford said his plan was adequate, and claimed parents in other provinces such as British Columbia envied his government's plan for schools.