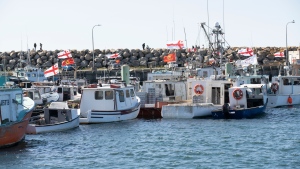 HALIFAX - A group of Nova Scotia Indigenous leaders has levelled harassment allegations at the federal government over an ongoing moderate livelihood fishery dispute, accusing the department responsible for fisheries of planning to seize gear from lobster trappers in the province.

The Assembly of Nova Scotia Mi'kmaq Chiefs issued a statement on Friday saying they'd learned of unspecified plans from the conservation and protection department of Fisheries and Oceans Canada, but did not disclose the source of their information.

The chiefs alleged department members may be planning to seize gear and traps belonging to fishers exercising what they describe as a protected right to earn a moderate livelihood from their efforts.

A departmental spokeswoman declined to comment on their specific allegations, but said federal officials are not necessarily aware of all actions taken by local staff.

“The Assembly condemns this action and demands all planned action related to seizure is aborted,” the chiefs said in a statement. “The Supreme Court of Canada has recognized the Mi'kmaq Right to fish for a moderate livelihood.”

A dispute over moderate livelihood fisheries has grown increasingly tense in recent weeks, with multiple violent clashes between Indigenous and non-Indigenous fishers taking place throughout October.

At the heart of the dispute lies a 1999 Supreme Court decision affirming that the Mi'kmaq have a treaty-protected right to earn a “moderate livelihood” by fishing, hunting and gathering when and where ever they want.

The federal government has confirmed it is committed to implementing the Mi'kmaq treaty right to pursue a moderate livelihood.

Many non-Indigenous people involved in the province's $1-billion lobster industry, however, have argued the court's decision also affirmed Ottawa's right

to regulate the industry to ensure conservation of the lobster stocks. And they have raised concerns that a growing “moderate livelihood” fishery could deplete the resource.

In the statement, the assembly accused Fisheries Minister Bernadette Jordan of “acting in bad faith” during recent consultations to end the dispute.

“There are more than 600 DFO fishery officers working in communities across the country, and the compliance measures they take are based on numerous factors,” she said.

The assembly also expressed concerns about the safety of Mi'kmaq fishers following a series of violent encounters and vandalism, including a fire that ravaged a lobster pound holding Sipekne'katik First Nations catch in Middle West Pubnico, N.S. earlier this month.

Yarmouth County RCMP released photos and videos in connection with the fire on Friday, asking the public for help in identifying two persons of interest.

Cpl. Lisa Croteau said in an interview the RCMP is currently working through the tips it's received as it continues to investigate the blaze.

Meanwhile, Sipekne'katik's commercial fishers contend it's “not worth the risk” to fish for lobster for fear of more violence and vandalism.

The fishers are concerned about going out in the water alongside non-Indigenous fishing boats once the season begins in November in the fishing area surrounding the southwestern shore of Nova Scotia, he said.

“Nine-hundred-and-thirty-five commercial boats go to the area and they don't feel safe,” Sack said. “It's just too much of a big loss compared to what they could benefit from it so none of them want to risk doing that.”

“I don't feel like pressuring them into doing so if safety is a concern,” he said, adding that the band had yet to lock down a buyer for its catch.

Sipekne'katik estimates financial losses from previous damage will come in at more than $3 million.

Sack said while the commercial fishers have expressed reluctance to get out on the water, those working for the band's livelihood fishery would continue to catch lobster.

He referred to a temporary injunction granted by the Supreme Court of Nova Scotia on Oct. 21 aimed at preventing people from interfering with the fishery.

The injunction said some of the opponents of the new fishery are using “criminal intimidation, threats, and property destruction.”