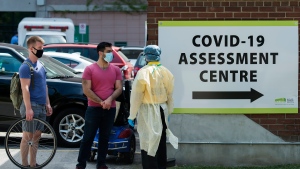 The number of new COVID-19 cases has jumped back up again after cases dipped below 300 for two days in a row this week.

In the province’s epidemiological summary released today, 383 new cases were reported in Ontario, up from the number of new cases reported over the past two days.

Ontario reported 292 new cases of the virus yesterday and 287 the day prior, marking the lowest number of new cases seen in the province in nearly two months.

Despite the spike in new cases reported today, it still signals that case growth appears to be on the decline in the province.

Ontario saw more than 400 new cases of the virus for five consecutive days prior to this week's drop.

Speaking to reporters on Thursday, Ontario’s chief medical officer of health Dr. David Williams said he expected an uptick in the number of new cases given that it has been seven days since the Victoria Day long weekend. The incubation period of the novel coronavirus range from seven to 14 days.

“We saw the same thing last Thursday and Friday after the Mother’s Day weekend,” Williams said, adding that Ontario could see an increase of new cases on Friday as well.

“We have to look at (the numbers) and see what that’s composed of and how’s that fit into our overall plateauing coming down.”

The positivity rate reported today was just over two per cent as the province once again ramped up testing.

According to today's data, 17,615 tests were processed over a 24-hour period yesterday, the highest number of tests completed in several days..

The number of virus-related deaths continue to increase.

Ontario reported 34 more deaths today, up 2 from the 32 reported yesterday.

The total number of virus-related deaths in Ontario now stands at 2,189, according to data collected by the province's Integrated Public Health Information System (iPHIS).

When asked why the province is not releasing COVID-19 hot spots in Ontario, Williams said local public health units have requested officials not to do that.

On Wednesday, Toronto Public Health released a map showing the neighbourhoods hardest hit by the virus. Areas in the northwestern part of Toronto have had the largest number of infections since the outbreak began.

“So, we respected the local unit, in this case, Toronto and Dr. Eileen de Villa and her team. They could release it as they wish and how they would like to interpret it because it is their jurisdiction and their responsibility,” he said.

Williams said Peel Region Public Health has informed health officials that they have identified COVID-19 hot spots in the region and are also planning to release the information.

On the other, York Region Public Health has told officials that they have not found any virus hot spots.

“Different health units have some difference depending on their social demographic as well as their physical layout. And some are dealing with more with institutional outbreaks,” Williams said.

Other highlights from today’s data: