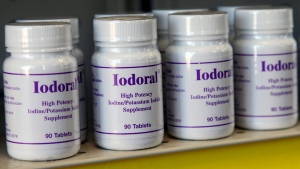 This Tuesday, March 15, 2011 photo shows bottles of potassium iodide on the shelf of the Texas Star Pharmacy on Tuesday, March 15, 2011 in Plano, Texas. The pharmacy has been receiving an unusually high number of calls about potassium iodide from people who are afraid radiation from the Japan nuclear crisis will reach the U.S. Health agencies in California and western Canada warned Tuesday that there's no reason for people an ocean away to suddenly stock up on potassium iodide, even as some key suppliers say they're back-ordered and getting panicked calls from would-be customers. (AP Photo/Richard Matthews)

TORONTO -- Ontarians have placed more than 32,000 orders for iodide pills in the two days following a false alarm about an incident at Pickering Nuclear Generating Station.

Ontario Power Generation says there are normally between 100 and 200 orders per month.

OPG says there were 32,388 orders placed between Sunday and Monday.

An alert Sunday morning warning of an unspecified problem at the nuclear facility was sent in error to cellphones, radios and TVs across the province.

In Ontario, potassium iodide (KI) pills are distributed to residents within 10 kilometres of a nuclear facility; others living within a 50-kilometre radius of one can order them through a website called preparetobesafe.ca. In New Brunswick - the only other province with an operating nuclear power plant - the distribution radius is 20 kilometres.

“The thyroid gland will absorb iodine that is in a person's bloodstream; it cannot tell the difference between radioactive iodine and non-radioactive (stable) iodine,” the CNSC says.

The risk of side effects is “extremely low,” according to the preparetobesafe website, which is operated by Durham Region, the City of Toronto and Ontario Power Generation. Rare and mild side effects include gastrointestinal issues or hypersensitivity reactions, and people with thyroid disorders are at a greater risk of side effects.

People should only take the pills if directed to do so by public health officials, CNSC says. They are considered to last for up to 12 years as long as they are stored in a dry location that is kept between 15 and 30 degrees Celsius.

Ontario has launched an investigation into the false alarm, and Solicitor General Sylvia Jones has said it won't be a long and drawn-out probe.

Initial observations suggest human error was responsible for the message that was sent out during routine tests of the emergency alert system, Jones said.

A follow-up alert with an all-clear was sent to cellphones nearly two hours after the original notification.