The Ontario government admitted to erroneously sending out a mass alert telling of an “incident” at Pickering Nuclear Generating Station on Sunday, sending people across the region into a panic as they sent a retraction notice approximately 106 minutes later.

At about 7:25 a.m. on Sunday, the province said an incident was reported at the station, located off of Montgomery Park Road in Pickering.

“There has been NO abnormal release of radioactivity from the station,” the alert read. “People near the Pickering Nuclear Generating Station DO NOT need to take any protective actions at this time.”

A retraction alert went out to phones at about 9:11 a.m.

“The people of Ontario should not have had to start their Sunday morning this way,” Solicitor General Sylvia Jones told CP24. “This morning’s error was inexcusable.” 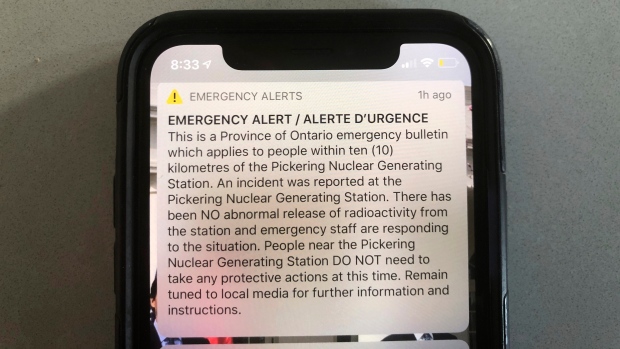 Jones said she has tasked Doug Brown, the chief of Emergency Management for Ontario, to do a full investigation into what occurred on Sunday morning.

She said the investigation will show what lead to the false notification and will provide recommendations on how to move forward to ensure it does not happen again.

The text of the alert said it applied to those within 10 kilometres of the station, but cell phone users in Ottawa, near Windsor and north of the GTA, told CP24 they received the alert.

The power plant is run by Ontario Power Generation and has been in service since 1971. It is slated to be decommissioned in 2024.

Jones said the alert was sent during a routine maintenance test by the Provincial Emergency Operations Centre (PEOC), which is responsible for co-ordinating the provincial government's response to major emergencies.

She said the notification went through the live system instead of the test system.

When asked if it was a human error, Brown said that it is going to be part of the investigation. 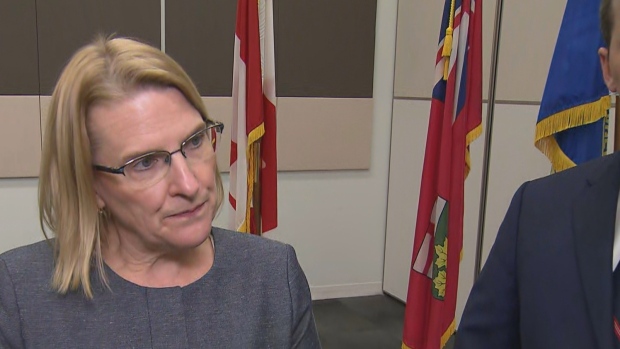 “And if it was an error by one of our staff members, we really want to look into what additional protocols, what additional procedures can we put into place to make sure that the system is robust so that individuals have full confidence throughout this province in the system.

“And when we disseminate an alert, the emergency information, that they listen to it and they adhere to the guidance within the information,” Brown said.

The delayed retraction, Jones said, was part due diligence to ensure that there was no issue at the nuclear station.

However, Jones said she was not satisfied with the lag between when the first alert and the second alert.

Brown said they coordinated with their partners and those working within the provincial emergency operations center as soon as the alert went out.

“We want to verify all the information on exactly what was happening to confirm if this was sent out an error or if this was a real-life situation.

“Once we had all the facts in place and we confirmed with our partners that we work with, we sent out the message as soon as possible to advise individuals that it was sent out in error,” he said.

Jones said she wants to see the changes that will be recommended in the investigation to ensure a better system is in place. 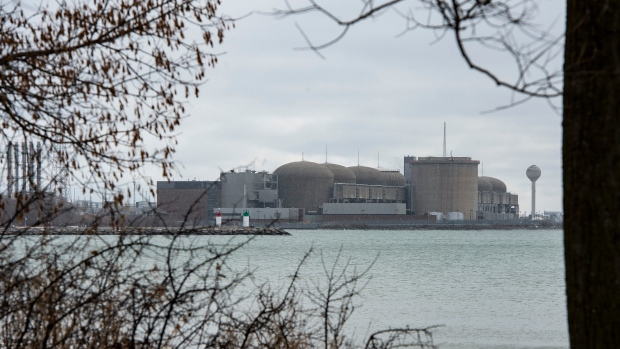 Pickering Fire Chief John Hagg said he reached the PEOC and they told him the alert, which appears to have reached most mobile phones in the province, was “sent out by mistake.”

“There is no danger to the public, there was no radiological event and what I can tell you is that we are working with the province to investigate what happened,” OPG spokesperson O’Neal Kelly told CP24.

He said that OPG knew immediately that there was no incident taking place at the Pickering Generating Station when they saw the alert on their own phones. 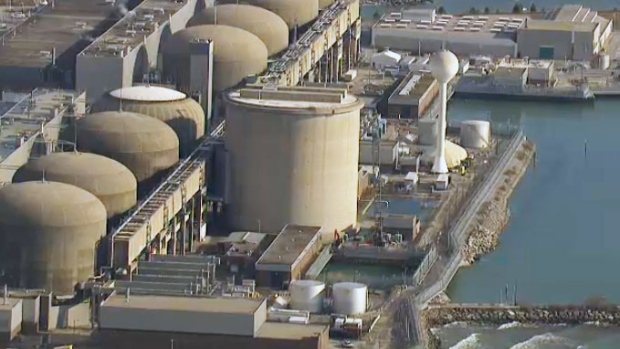 Pickering Mayor Dave Ryan said he was in his kitchen getting coffee when he got the alert.

Ryan said he immediately heard from all the emergency services in Durham Region including fire and police.

“They very quickly determined that it was a false alarm and we moved forward from there,” Ryan said.

The mayor said he was also promptly contacted by Peter Bethlenfalvy, MPP for Pickering-Uxbridge and the OPG to reassure him that it was a mistake.

“The province needs to initiate this investigation immediately,” he said. “We need answers.”

"Confidence in the accuracy of the system is essential for public safety," he said.

Important update: the alert regarding #Pickering Nuclear was sent in error. There is no danger to the public or environment.