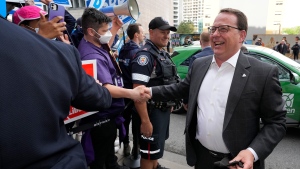 TORONTO - The leader of Ontario's Greens headed to two ridings on Tuesday where he sees the best chances of growing his party, seeking to build on momentum from his fiery performance at the leaders' debate the night before.

Mike Schreiner made a strong impression Monday night at his second debate of the campaign, landing sharp criticisms of Progressive Conservative Leader Doug Ford's record on the pandemic, the environment and his relationship with health workers.

After winning the Green Party's first-ever seat in the provincial legislature in Guelph four years ago, Schreiner said Tuesday that he'shoping to grab another in Parry Sound-Muskoka, where fifth-time candidate Matt Richter is running with no Liberal rival and no incumbent Tory in the race.

“We're just excited about the momentum we're seeing in Parry Sound-Muskoka. It feels a bit like the momentum we saw in Guelph in 2018,” Schreiner said in Toronto before heading to an event in Huntsville.

“We certainly want to take advantage of that.”

Earlier in the day, Schreiner had stopped in Toronto's University-Rosedale riding, where former environmental commissioner Dianne Saxe is considered another star candidate for the Greens.

Schreiner mentioned both Saxe's and Richter's campaigns on Monday night in his final plea to viewers of the election debate.

Saxe introduced Schreiner on Tuesday as the “winner oflast night's debate.” Both candidates focused broadly on the party's climate plan that they said would help secure a more livable future for children and youth - touting a pledge to lower the voting age to 16 so young people can have more of a say in political decisions.

When asked about his party's unlikelihood of forming government, Schreiner encouraged people to vote for Green candidates in their ridings anyway.

“If you want Green, vote Green,” he said.

He argued that even a few Green representatives would have an oversized influence in policy decisions - a theme he also hit on in Monday's debate, where he repeatedly suggested that the NDP tweaked its platform to “keep up” with the Greens on housing and disability support promises.

Saxe also made the case that the Green message is picking up steam in the Toronto riding where an incumbent New Democrat is running for re-election, saying she's heard frustration from voters about the NDP's climate plan.

Tim Abray, a teaching fellow in political studies at Queen's University, said he was “deeply impressed” with Schreiner's debate performance.

“He was extremely well prepared and he did a very good job of driving always to facts and to accountability, which if you're trying to make headway in the political arena, those things are extremely important to focus on,” he said.

“By holding the other people in the debate to account, holding the other parties to account, and putting forward clear, very, very well-stated short expressions of things that he would do, facts about the problems that exist in Ontario right now and the way in which he would address them, it gives people something tangible to hang on to.”

At Monday's event, Ford faced attacks on health care and education from the other three leaders, but he stuck to his message of building more infrastructure, creating jobs and making life more affordable.

The PC leader announced a union endorsement Tuesday morning in Toronto before door knocking later in the day in York South-Weston, the riding in which his nephew Michael Ford is running.

NDP Leader Andrea Horwath was focused on education with an announcement in Toronto pledging to clear the province's school repair backlog within 10 years, followed by another in the bellwether riding of Peterborough-Kawartha about doubling mental health supports in schools.