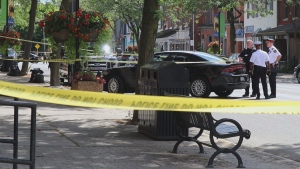 Cobourg police are on the scene of a fatal shooting in the downtown area on Monday, June 27, 2022.

A man fatally shot in downtown Cobourg on Monday has been identified as a Toronto resident.

Cobourg police were called to King and Division streets just after 10 a.m. for a shooting. When they arrived, officers found a man with life-threatening injuries.

He was taken to the hospital, where he was pronounced dead. On Wednesday, police identified the victim as 37-year-old Rohan Pyne from Scarborough.

Police are looking for two suspects who fled the scene in a black Lexus SUV, which was believed to be stolen. Officers were able to locate the vehicle abandoned in Markham later that day.

Police continue to ask anyone with information that could help with the investigation to call Northumberland OPP at 1-888-310-1122 or Crime Stoppers anonymously.