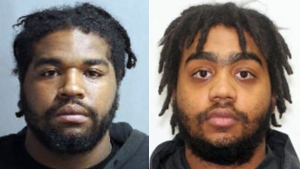 Keysean Patterson, 21 (left), and Taijaune Khan, 20 are wanted for attempted murder after a stabbing at Main Street Station on May 13, 2022. (Toronto Police Service)

Toronto police have identified the two suspects being sought in connection with a stabbing at Main Street subway station that left a man critically injured last week.

Police said a 23-year-old man was exiting the TTC Line 2 station on the evening of May 13 when two men chased him back inside and stabbed him with a knife.

The 23-year-old ran out of the station to escape the two men, but they caught up with him and allegedly stabbed him again, police said.

The suspects then fled the scene and headed towards Danforth Avenue, leaving the victim with life-threatening injuries.

Police and paramedics arrived, and he was transported to the hospital.

Police released security camera images and descriptions of the two suspects on Monday, asking the public for help in identifying them.

Both are wanted for attempted murder.

“They are both considered to be armed and dangerous. If located, do no approach, call 9-1-1 immediately,” police said.