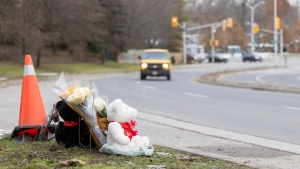 LONDON, Ont. - A 76-year-old woman is facing criminal charges after a crash that left an eight-year-old girl dead and sent several other people to hospital in London, Ont., late last year.

Police have said that a vehicle mounted a curb on the evening of Nov. 30 and crashed into 10 pedestrians, some of whom were members of the Girl Guides of Canada.

Those hit ranged in age from six to 40.

James and Kathy Stemp identified the eight-year-old who died as their daughter Alexandra, “a vivacious little girl with a terrific sense of humour.”

McNorgan is due in court in April to face the charges.