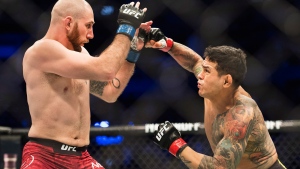 Diego Ferreira, right, fights Kyle Nelson, left, during the UFC Lightweight bout in Toronto on Saturday, Dec. 8, 2018. Nelson, a native of Huntsville, Ont., jumped at the opportunity even though the bout was at lightweight, 10 pounds heavier than his usual 145-pound weight class. THE CANADIAN PRESS/Nathan Denette

He had the essentials though and they came in handy when he got a late call to make his Octagon debut against Brazil's Diego Ferreira at UFC 231.

“I had come down Tuesday morning, I just had some track pants and my usual training gear,” Nelson said after Saturday's second-round loss. “We got the call Tuesday night, (saying) we need you in Toronto tomorrow. So I wasn't able to go home and get anything.

“But luckily I had my mouthpiece and my jock and that's all I needed.”

Nelson, a native of Huntsville, Ont., jumped at the opportunity even though the bout was at lightweight, 10 pounds heavier than his usual 145-pound weight class.

Canadian John Makdessi had the original booking but pulled out due to injury. His replacement, Jesse Ronson, was scratched due to weight issues.

That set the stage for Nelson, who last fought three weeks ago in Romania in the Real Xtreme Fighting promotion.

Nelson entered on a six-fight win streak and looking to improve on a 12-1 record. Ferreira, a third-degree black belt in Brazilian jiu-jitsu, entered with a 13-2 mark.

The 27-year-old Canadian exuded confidence as he walked out to Diddy's “Coming Home” before a partisan crowd at Scotiabank Arena. The swagger continued in the cage as he connected with some left hooks and kicks in the early going.

Ferreira was knocked down a couple minutes in but rather than test the Brazilian's ground game, Nelson raised his arms and gestured for him to get back to his feet.

Ferreira took over from there, eventually getting top position and laying in some ground and pound as the Canadian did well to escape the round.

“I had everything against me,” Ferreira said. “The arena, all the people around me screaming his name, but my coach told me, 'Don't worry, just do your thing.' I focused on the fight, finished, got out of there, let's go celebrate. That's what we're doing right now.”

Ferreira took Nelson down again just 10 seconds into the second round and a steady flurry of blows forced the referee to stop the fight over a minute later.

“My opponent is a pretty tough guy on the ground,” Nelson said. “Unfortunately I got a little tired. He was able to get on top, didn't really hurt me with anything, but he held me there and I couldn't get up. It was completely understandable that the ref stopped it.”

With just four days notice, both fighters had little time to prepare.

Nelson, who normally trains in Stoney Creek three days each week, watched some video of his opponent but his fitness level - while solid - was not in peak form.

Nelson still impressed in the early going and hopes to use the experience as a building block.

“My foot is in the door now,” he said. “Hopefully we can get a fight with a full fight camp and a full six weeks notice, I can go down to my natural weight of 145. I have a little better time wrestling with guys my size. But it's been a great experience so far.

“It's been rushed and jam-packed into a really short period of time but I've tried to take in as much as I could along the way.”

The fight was the second bout on a 13-fight pay-per-view card.

“I fought in the UFC so hopefully that means big things,” Nelson said. “Unfortunately I did lose but I think in that first round, hopefully I showed (UFC president) Dana White and the guys that I've got a lot of skill. I'm ready to come in and swing with anyone.