The triumph for "Monsieur Lazhar" follows acclaim from critics around the world and an Oscar nomination for best foreign-language film. The intimate low-budget dramedy beat out slick star-packed rivals including David Cronenberg's "A Dangerous Method," which nabbed five awards, and Jean-Marc Vallee's "Cafe de Flore," which claimed three.

Wins for "Monsieur Lazhar" included the second best picture trophy in a row for Quebec producers Luc Dery and Kim McCraw, who were also behind last year's champion, "Incendies."

"We're really honoured, it's revenge (for) the Oscar," McCraw said to laughs at a press conference backstage, referring to the film's recent Academy Award loss to Iran's "A Separation."

The film snapped up best director and best adapted screenplay prizes for seasoned Quebec writer-director Falardeau, who also made light of the Oscar loss in his acceptance speech.

"I wrote a speech two weeks ago and I didn't have the chance to say it but I feel really tempted to recycle the first phrase: I'd like to thank the members of the academy," Falardeau said in reference to the U.S. Academy of Motion Picture Arts & Sciences before thanking the Academy of Canadian Cinema & Television.

Backstage, he downplayed the back-to-back Genie sweep by Quebec cinema, saying he wanted filmmakers across the country to know what it takes to make a mark in the industry.

"Be bold, be persistent, be wowed, be a little delinquent and take risks and I think that's what we've been doing back home," said Falardeau.

"I don't keep marks of 'Oh, yeah, Quebec one year, Quebec the other year.' It's just films and I think the films that are winning are worth seeing. And I would have liked to have said to the Canadian public: Go see them, not because they're Canadian films, because they're good films."

Mortensen, who won a best supporting actor trophy for his turn as a cigar-chomping Sigmund Freud in Cronenberg's "A Dangerous Method," provided one of the show's highlights by proudly displaying his hockey fanaticism.

The lanky actor drew enthusiastic cheers by unfurling a Montreal Canadiens flag onstage during his acceptance speech and later draping it over his statue.

"It's a very beautiful trophy and I think in order to cross the border safely I'll have to wrap it very, very carefully so I brought some very strong material with me," Mortensen said as he unfolded the red, white and blue fabric to hoots from appreciative hockey fans.

"I think this will do nicely. I said 'I thank David Cronenberg' but I dedicate this award to the Montreal Canadiens. We'll be back next year with a vengeance. Thank you very much."

The period drama's other wins included best original score for Howard Shore, best art direction, best sound and best sound editing. It had been up for 11 prizes.

Vallee's sweeping romance "Cafe de Flore," which led the nominees overall with 13 nods, secured a best actress trophy for Paradis and her turn as an impoverished single mother in 1960s Paris who is fiercely devoted to her headstrong son, who has Down syndrome. Paradis was not at the awards bash.

Other prizes for "Monsieur Lazhar" included best editing and best actor for Mohamed Fellag, who stars as an immigrant substitute teacher who helps a class of Montreal students grapple with the suicide of their teacher. Meanwhile, 11-year-old Sophie Nelisse won best supporting actress for her turn as a wise-beyond-her-years grade-schooler.

"Thank you to everybody who voted for me," Nelisse said while clutching the statue with both hands, going on to thank her agent, the film's crew, her gymnastics coaches and teachers.

The poised pre-teen appeared cool, calm and collected as she proceeded backstage for photographs and a media press conference, but admitted to feeling a few butterflies just before her name was announced.

"When I was on the stage over there I was really stressed because I didn't think I was going to win," Nelisse confessed.

The prizes were handed out in Toronto at a ceremony hosted by CBC personality George Stroumboulopoulos.

"SCTV" comedian Andrea Martin had been scheduled to share the MC duties, but pulled out at the last minute due to a scheduling conflict.

The show made light of the last-minute dropout with a pre-taped skit in which Martin interrupts a planning meeting with Stroumboulopoulos to accept a cell phone call.

She later excitedly tells Stroumboulopoulos she's got a call back from a bladder-control commercial that she can't pass up.

The awards aired on CBC-TV. 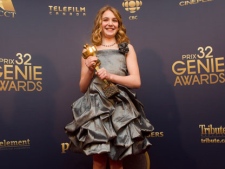 Sophie Nelisse holds the award for Actress in a Suporting Role for the movie "Monsieur Lazhar" at the 32nd Genie Awards in Toronto on Thursday, March 8, 2012. (THE CANADIAN PRESS/Chris Young.) 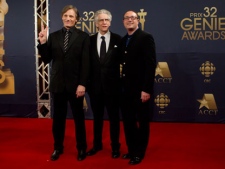 Viggo Mortensen (left), David Cronenberg and Martin Katz (right), from the movie "A Dangerous Method' arrive on the red carpet at the 32nd Genie Awards in Toronto on Thursday, March 8, 2012. (THE CANADIAN PRESS/Chris Young.)