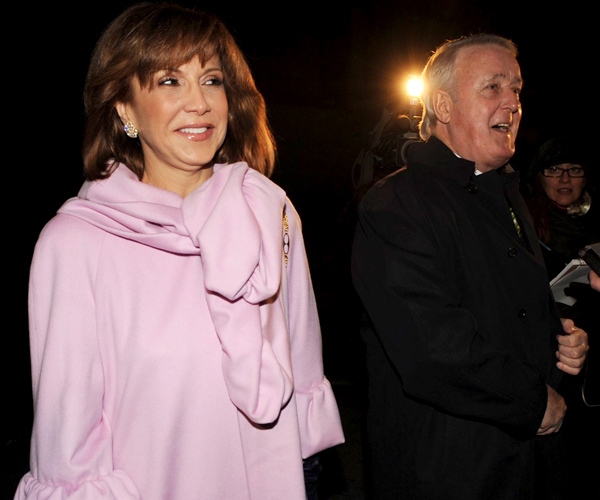 Former prime minister Brian Mulroney and his wife Mila arrive for the wedding of their son Ben Mulroney in Montreal on Thursday Oct. 30, 2008. (Graham Hughes / THE CANADIAN PRESS)

OTTAWA - A public inquiry into controversial business dealings between Brian Mulroney and Karlheinz Schreiber will cost taxpayers more than $14 million, The Canadian Press has learned.

Sources familiar with the commission's work say the first instalment of its budget will likely come in at about $7.5 million for the fiscal year that ends March 31.

That's well below the $9.5 million forecast in government spending estimates quietly tabled in the House of Commons this month. But the saving is illusory, largely resulting from delays that have put off most of the public hearings until spring.

The leftover money will be rolled into the 2009-10 fiscal year, and further costs from April to December are expected to boost the total to between $14 million and $15 million by the time Justice Jeffrey Oliphant delivers a final report.

And the total doesn't include $307,000 the Conservative government spent separately on preliminary work before the inquiry was called.

The tab for salaries and benefits for staff at the Oliphant commission is estimated at a relatively modest $740,000 for the current year.

The rest of the money will be spent on operations, a category that includes everything from the gathering of written and oral evidence to computer systems, research studies by outside experts, and the rental of space for the commission's offices and hearings.

Full details of the planned spending aren't scheduled to be made public for another two weeks.

At least one element that has driven up the cost of past commissions of inquiry will be limited this time, sources said -- legal fees for the participants.

Mulroney and Schreiber are paying their own lawyers' bills for the probe. Only Fred Doucet, a lobbyist and former aide to Mulroney, has asked for and been granted public funding.

In addition to the official inquiry, the Privy Council Office set aside $800,000 last fiscal year for a preliminary review of the affair that was headed by David Johnston, president of the University of Waterloo.

His task was to advise Prime Minister Stephen Harper on whether the facts known at the time merited a full-blown inquiry, and to propose formal terms of reference for any such probe.

Johnston's personal payments were set by a cabinet order at between $1,200 and $1,400 a day, but it's not known exactly how much he collected.

Myriam Massabki, a PCO spokeswoman, said Wednesday that the $800,000 that had originally been budgeted for the project wasn't fully spent. The two reports delivered by Johnston actually cost $307,000 to produce, she said, and that included travel and other expenses.

Johnston did not reply to phone and email queries.

News of the budget projections for Oliphant's work came as the judge issued the latest in a series of procedural decisions setting the scene for hearings due to start March 30.

Guy Pratte, the lawyer for Mulroney, had argued the only acceptable yardstick for measuring his client's conduct was the ethics code Mulroney himself introduced as Tory prime minister in 1985.

Oliphant rejected that claim, saying he has to cast a wider net in assessing Mulroney's dealings with German-Canadian arms dealer Schreiber.

That means not only examining the 1985 cabinet code of conduct, but also the ethical provisions embedded in federal statutes, including the Financial Administration Act, the Income Tax Act, and even the Criminal Code.

Oliphant hastened to add that he won't be making any findings of criminal or civil liability -- something he's prevented from doing under his mandate.

But the guiding principle has to be broader than any single code or law, he said.

"This inquiry is ultimately concerned with the good government of Canada."

Harper first promised an inquiry in November 2007, but delayed action while he first sought advice from Johnston, then waited for the Commons ethics committee to conclude its own hearings.

Oliphant was finally appointed in June 2008, but the inquiry has spent most of its time since then working behind closed doors. He isn't due to report until Dec. 31, 25 months after Harper's initial promised to get to the bottom of things.

Mulroney has admitted he accepted $225,000 from Schreiber after he stepped down as prime minister in 1993 to promote the building of German-designed light armoured vehicles in Canada.

He says he tried to line up support among foreign political leaders whose countries might buy the vehicles.

Schreiber says the deal was struck before Mulroney left office although the cash didn't change hands until later. He also claims the payments totalled $300,000 and that Mulroney was supposed to lobby the Canadian government, not foreign leaders.