The Demographia International report released Monday looked at 272 metropolitan markets in Canada, the U.S., the U.K., Australia, New Zealand and Ireland and calls on governments to allow more housing to be built on the fringes of urban areas to help keep costs down.

The report says Vancouver was the most unaffordable market in the world last year when median housing sale values are compared to median household incomes. Toronto is in the severely unaffordable category. Montreal is classified as being seriously unaffordable.

"There is a view among urban planners that we have got to stop the expanse of the city," said American Wendell Cox, who wrote the report with Hugh Pavletich of New Zealand. "They have a pejorative term -- sprawl. It is a synonym, as far as they're concerned, for sin.

"It is very difficult to develop new housing on the fringe. Fringe housing on cheap land has been the secret of the expansion of home ownership."

The authors made their rankings by taking the median residential house values from the third quarter of 2009 and dividing it by median annual gross household incomes. The four categories include severely unaffordable, seriously unaffordable, moderately unaffordable and affordable.

The report suggests that homes in Edmonton and Calgary are also considered to be in the seriously unaffordable category, but Cox noted that prices there are getting somewhat cheaper because of the economic downturn.

But Brent Gilmour, acting CEO of the Canadian Urban Institute, said the report oversimplifies other factors that affect housing affordability, such as regional real estate markets and economic conditions.

The report also fails to include the financial, social and environmental benefits of "smart" urban planning. They include lower infrastructure costs, reducing the need for long commutes and cities designed for people who don't or can't drive cars, he said.

"You have to look at the quality of life in a neighbourhood. The ability to walk, to bicycle. Are there parks and recreational facilities that are nearby?" Gilmour said from Toronto.

"This study doesn't take into consideration any of those things."

Gilmour said major Canadian cities look at the return on investment when planning new residential areas. Conventional planning based on large subdivisional blocks that require more roads, more sewers and more lighting have long-term costs that may not be reflected in the price of a house.

Municipalities must also plan for the need to look after the growing number of seniors with mobility issues who tend to become isolated in cities with urban sprawl, he said.

Cox said the cost of building new roads and transit services to new housing developments is a pittance compared to how urban consolidation policies boost housing prices and rents.

"You need to begin allowing land to be developed by the free market," he said from St. Louis.

"You need to be allowing the land on the fringe to be opened up to development without the planners telling where the development must occur." 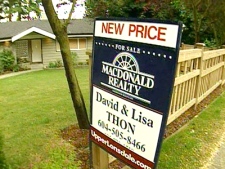 The national average home price is forecast to ease by 2.1 per cent to below $300,000 in 2009, according to a report by the Canadian Real Estate Association.