An Edmonton professor, a Toronto-area family of three and university students returning to their studies were among 138 people travelling to Canada who died Wednesday morning when a Ukrainian passenger plane crashed shortly after taking off from Iran's capital, Tehran.

Prime Minister Justin Trudeau said 138 of the 176 passengers aboard the Kyiv-bound plane had connecting flights to Canada.

As victims' identities began to emerge in the hours following the crash, universities across Canada lowered flags to half-mast and began mourning faculty members and students, who featured heavily on a passenger list that included at least 63 Canadians.

[IN PHOTOS: Images from the scene of a deadly Ukrainian airliner crash near Tehran]

Other victims included many from Edmonton, Toronto-area professionals and a family of three from Ajax, Ont. CIBC bank says Evin Arsalani, her husband Hiva and their one-year-old child all died in the crash.

“We are deeply shocked and saddened by the tragic loss of Evin, Hiva, and their young daughter,” the bank said. A passenger list released by Ukraine International Airlines shows a passenger named Hiva Molani on the flight accompanied by a one-year-old listed as Kurdia Molani. 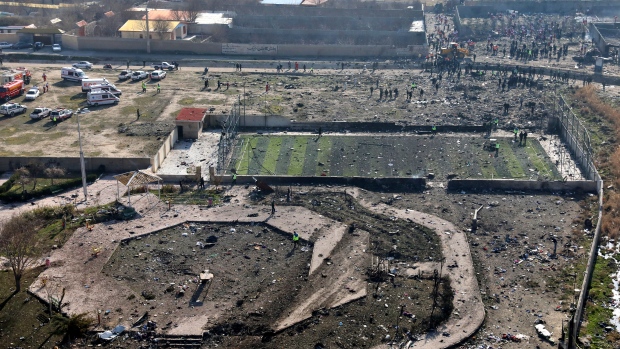 More than a dozen students as well as professors and alumni from universities across Canada were confirmed among the crash victims.

University of Alberta President David Turpin said several of the school's students were among the victims.

“This is a devastating loss for the University of Alberta,” he said. “Ours is a closely interconnected community, and we grieve with everyone touched by this terrible loss - friends, classmates, roommates, professors, students, mentors, and colleagues.”

Payman Paseyan, a member of the Iranian-Canadian community in Edmonton, said his friend Pedram Mousavi, an engineering professor at the University of Alberta, died along with his wife Mojgan Daneshmand and their daughters Daria Mousavi and Dorina Mousavi.

“They had two young girls with them. I can't imagine what was going through their mind,” said Paseyan.

Hossein Saghlitooin, who did his PhD and post-doctorate under Mousavi, said he has known the family for about six years.

“I was crying my eyes out. I am not an emotional person, but I know them so much,” he said. “It's not just that I was working with them or that he was my boss, he was a friend. He was like a father to me.”

Saghlitooin said it took him several hours to confirm the information, and then he had to tell his colleagues one by one.

“Both of them were amazing, sweet people - they were so kind, irreplaceable,” he said. 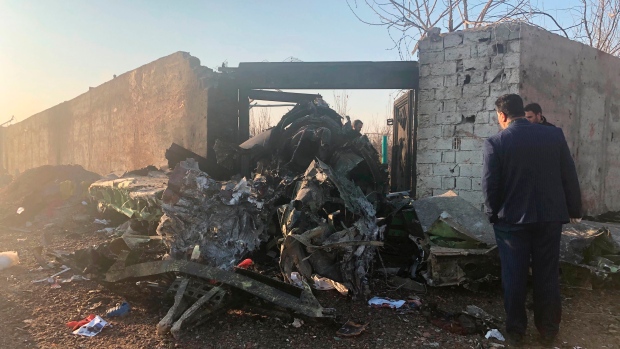 The school originally said Azdahri's partner also died in the crash, but later said that was not confirmed.

The Boeing 737-800 was en route to Ukraine's capital when it went down. 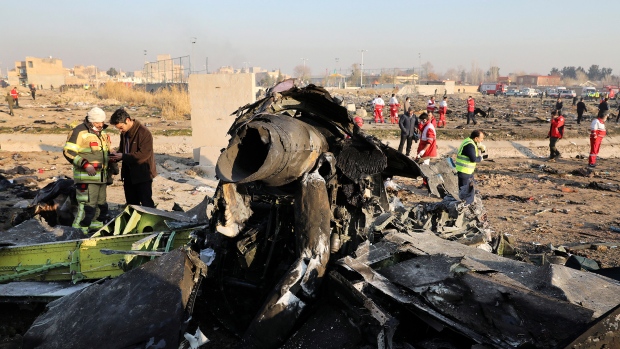 While university students featured prominently in the plane's passenger list, those reported dead hailed from all walks of life.

They included a dentist who worked in Aurora, Ont., and her daughter, an employee of the Ontario Secondary School Teachers' Federation and a high school student.

Northern Secondary School in Toronto held a moment of silence after announcing Grade 10 student Maya Zibaie was among those on board.

Shayesteh Majdnia, a past president of the Iranian Heritage Society of Edmonton, said she was close friends with Shekoufeh Choupannejad, a gynecologist who died along with her two daughters, Saba Saadat and Sara Saadat.

Majdnia said she had spoken to Choupannejad's husband, who is still in Iran, for confirmation.

“She was the kindest person I had ever met,” said Majdnia, speaking about Choupannejad.

As of Wednesday afternoon, several other Canadian schools were going through the heartbreaking task of determining whether any of their students were aboard the plane. According to the airline's passenger list, which includes passengers' year of birth, more than a third of passengers were 30 or under.

A spokesman from University of Waterloo said it was aware that two of its PhD students are on the passenger list. McMaster also said two of its graduate students appeared to be aboard.

The University of Manitoba confirmed confirmed alumnus Forough Khadem, an immunologist and plant scientist, and Amirhossien Ghasemi, a graduate student in engineering, were on the plane.

The crash comes in a region where tensions have been running high following the American assassination of a top Iranian general near Baghdad and retaliatory missile attacks on U.S. bases in Iraq. Ukrainian authorities initially said it appeared mechanical failure was to blame for the crash, but later walked that back, saying nothing has been ruled out.

Trudeau said he was “shocked and saddened” at the loss of life, and promised the crash would be thoroughly investigated.

“Today, I assure all Canadians that their safety and security is our top priority,” he said in a statement. “We also join with the other countries who are mourning the loss of citizens.” Transport Minister Marc Garneau said Canada would offer technical assistance in the crash investigation.

Payman Paseyan, a member of the Iranian-Canadian community in Edmonton, said multiple people from the city, including many international students, were on Flight PS752. He said he knew many of the victims.

“They leave behind families and people they love, and they come to Canada, and often they're second guessing, 'Should I leave my family behind to do this?”' Paseyan said. “Then they move here and they do all this just to board a plane and have it all washed away. It's devastating.”

Global Affairs Canada warned against any non-essential travel to Iran “due to the volatile security situation, the regional threat of terrorism and the risk of arbitrary detention.” The agency said Canadians, particularly those holding dual Canadian-Iranian citizenship, were at risk of being arbitrarily questioned, arrested and detained.

Ukraine's ambassador to Canada, Andriy Shevchenko, said his heart was broken. “We will have to go through this terrible pain together with our Canadian brothers and sisters,” Shevchenko said in a tweet.

The plane, fully loaded with fuel for its 2,300-kilometre flight, slammed into farmland near the town of Shahedshahr on the outskirts of Tehran. Videos show fires lighting up the darkened fields before dawn and rows of body bags laid out along the side of a road.

Airline officials said most of the passengers had planned to transit through Kyiv to other destinations.

The plane had been delayed from taking off from Imam Khomeini International Airport by almost an hour. It never made it higher than 2,400 metres, data from the flight-tracking website FlightRadar24 indicates.

Qassem Biniaz, a spokesman for Iran's Road and Transportation Ministry, said it appeared fire erupted in one of the plane's engines. The pilot then lost control and the plane crashed to the ground, Biniaz said, according to the state-run IRNA news agency.

It is one of the deadliest air disasters involving Canadians.