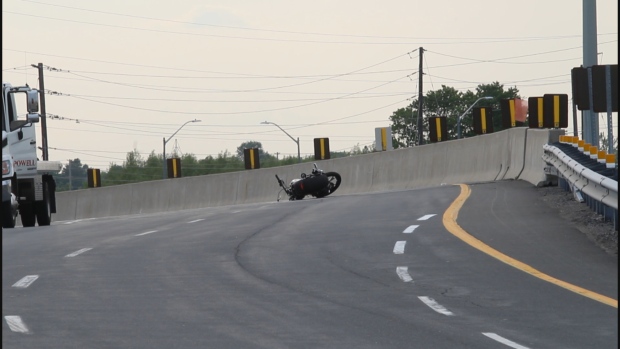 Police are investigating a fatal motorcycle crash in Oshawa on June 4, 2020.

A 49-year-old man is dead after a single-vehicle collision in Oshawa Thursday evening.

Ontario Provincial Police Sgt. Kerry Schmidt said they were called to a crash on Highway 401 eastbound off-ramp to Stevenson Road just after 6 p.m.

When officers arrived at the scene, they located a motorcyclist without vital signs.

Schmidt said the victim died on his way to a hospital.

"We don't have a cause for this crash," Schmidt said.

"Environmental conditions were fine and not sure what the factors were that led to this crash."

Schmidt said the victim was the lone rider of the motorcycle.

The ramp lane to Stevenson Road from Highway 401 was shut down for several hours for a police investigation but it has since reopened.