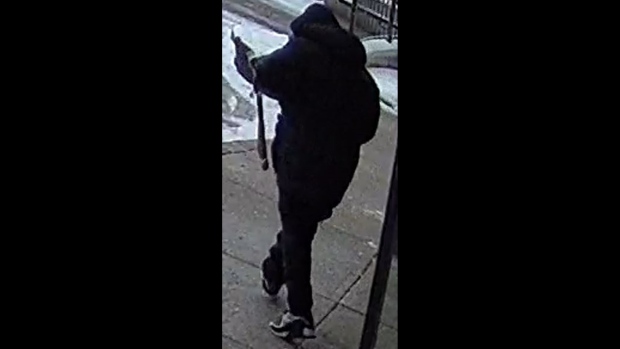 Police have released surveillance images of a male suspect after an 87-year-old woman using a walker was pushed to the ground and robbed of items belonging to her late husband in Toronto’s Downsview area last week.

Toronto police say that at about 2 p.m. on Feb. 7, they were called to a building in the Keele Street and Sheppard Avenue West area for a report of a robbery.

An 87-year-old woman told police she was in the lobby of an apartment tower when she was approached by an unknown man.

He allegedly threw her from her walker to the ground and took “personal items and memorabilia from her late husband,” before fleeing on foot.

He is described as a tall man with a heavy build.

The suspect was last seen wearing a dark-coloured puffy North Face winter coat with the hood up, a dark baseball cap with a gold round sticker on the top of the brim, a two-tone scarf across the lower half of his face, white gloves, dark pants, and black running shoes with white detailing.

His image was released to the public on Thursday.