'A blessing': Vaughan man with COVID-19 pulls through after 3 weeks of induced coma in ICU 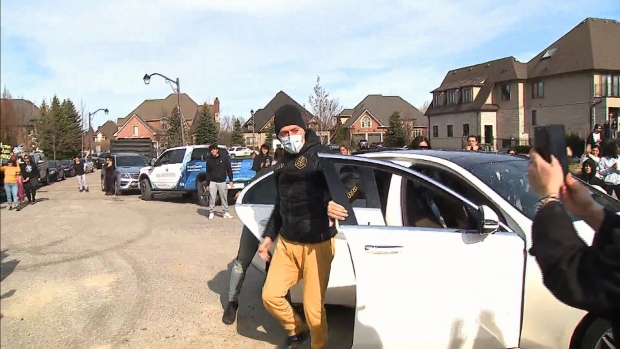 Mario Bottoni, 55, returns home after five weeks in the hospital.

After spending about five weeks in an Ontario hospital, a 55-year-old man was finally able to reunite with his family and friends following his recovering from COVID-19.

Mario Bottoni was admitted to North York General Hospital on April 1 after experiencing shortness of breath. His family thought he was having a heart attack and drove him to the emergency room.

Within 24 hours, Bottoni was put on a ventilator in the intensive care unit (ICU), where he remained for three weeks in an induced coma. His family said that of the six people who were brought into the ICU at that time as a result of COVID-19, only two have survived.

“It was just getting worse. We actually thought we were going to lose him,” his sister-in-law Julia Amini told CTV News Toronto.

After about three weeks, Buttoni was able to leave the ICU, but his kidneys were left badly damaged and he remained in the hospital for another two weeks.

“It’s just a blessing,” he said of his recovery.

On May 5, he was finally discharged. He met his wife and two children outside the hospital, where they hugged before they drove him to his home in Kleinburg, Ont.

Upon arrival, Buttoni was met with about 100 of his family, friends and neighbours, who had all lined the street holding signs and balloons to welcome him home. He appeared to be genuinely surprised, saying that “he didn’t even know he knew this many people.”

“The excitement inside my heart, my heart is throbbing right now,” Buttoni’s brother-in-law said while standing on the street.

“There were three nights where he was very ill, could not breath completely. The updates we were getting were all negative.”

“Then we started getting good news and everyone started cheering up.”

Amini said the whole experience has been an incredible challenge for the family, who experienced a death unrelated to COVID-19 just weeks earlier. She said the staff at the hospital, especially the health-care workers inside the ICU, were amazing and provided her with updates daily.

“They actually told us that he was a miracle, Mario, that he survived this” Amini said.

Buttoni described COVID-19 as a “terrible disease,” and said he was thankful for his friends and family for their ongoing support.

“It made a difference,” he said.

On Tuesday, provincial health officials said that the total number of COVID-19 cases in Ontario now stands atmore than 18,000, including deaths and recoveries.