'A miracle': Man pushed by dump truck from collector to express lanes on 401 survives horrific crash

An Ontario man has walked away from a horrific crash on Highway 401 without any physical injuries after he was pushed by a dump truck for about half a kilometre.

Hussain’s family said he was driving in the collector lanes near the Keele Street exit around 10:30 a.m. when a dump truck hit his Honda Civic from behind.

Hussain’s family said after he was hit, the car spun, at one point turning into a position facing the driver of the dump truck. They said he was pushed about half a kilometre along the highway from the collector lanes into the express lanes.

“He was (in) shock the whole the whole time. It was very stressful ” said Hussain’s relative translating Hussain’s words from Urdu.

Hussain drives to work along the 401 from Ajax to his job in Toronto. When his family learned of the crash they were shaken and upset.

“He has a 10 year old son, he was really crying when he heard about the accident, my sister was crying, the whole family was in shock”. 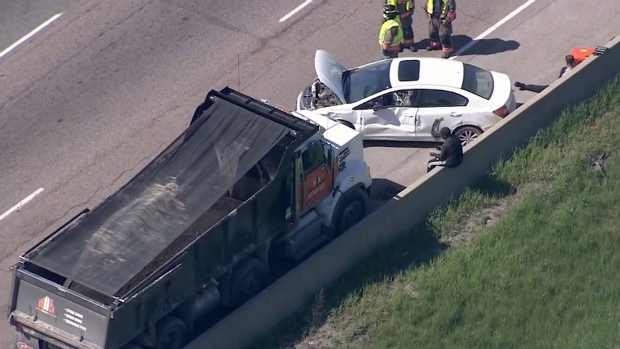 Ontario Provincial Police responded to the crash. Police say the dump truck came to a stop because of the help of other motorists on the highway.

“Other motorists in the area had to honk their horns and get the driver’s attention to stop and when he did stop realized there was a car in front of his vehicle on the bumper getting pushed with the male driver obviously panicking as to what was going on,” said Sgt. Kerry Schmidt.

Friday afternoon Hussain was surrounded by concerned family members as he came out of hospital after some tests and a CT scan, done as a precaution.

Kazmi said Hussain was in shock following the crash and does have some body pain, but no broken bones or any signs even of a scratch.

Family members say they are happy and thankful he’s alive and is doing so well.

Syed Hussain is seen surrounded by his family. (Beth Macdonel)