A timeline of events in the B.C. to Manitoba manhunt 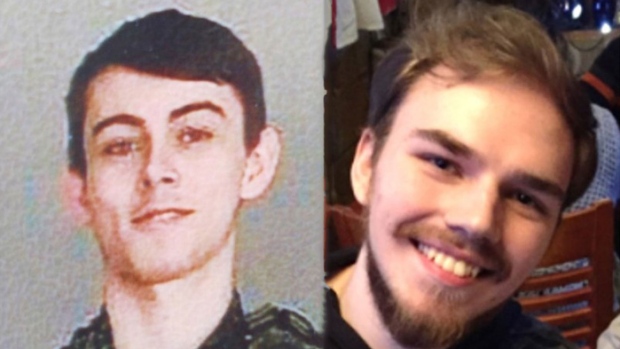 Bryer Schmegelsky, left, and Kam McLeod are seen in this undated combination handout photo provided by the RCMP. THE CANADIAN PRESS/HO, RCMP

Three people are dead in northern B.C. and there is a major search stretching across Western Canada for two young men police say are suspects. Here's a timeline of events:

July 15 - The bodies of a man and a woman are found near a blue van on the Alaska Highway, also known as Highway 97, near Liard Hot Springs, B.C.

July 18 - RCMP announce Australian Lucas Fowler, 23, and his 24-year-old American girlfriend, Chynna Deese, are homicide victims. Meanwhile, in Jade City, B.C., Kam McLeod, 19, and Bryer Schmegelsky, 18, are spotted in a store where they stopped for free coffee. Jade City is about 350 kilometres from where the two bodies were found.

July 19 - Police announce the body of a man has been found two kilometres from a burned-out truck belonging to McLeod and Schmegelsky near Dease Lake, B.C. The two teens are missing. Dease Lake is about 470 kilometres from the first crime scene.

July 21 - McLeod and Schmegelsky are spotted in Cold Lake, Alta., where a local resident, not knowing who they are, helps them free a stuck Toyota Rav 4 they are driving. The are also captured on security camera footage at a store in Meadow Lake, Sask.

July 22 - Mounties say Fowler and Deese were shot. They release composite sketches of a man seen speaking with the couple on the highway where they were found dead and a sketch of the unidentified man found dead near the burned truck. Fowler's father, an Australian police inspector, pleads for public help in the investigation. At the same time, band constables with Tataskweyak Cree Nation at Split Lake in northern Manitoba talk with McLeod and Schmegelsky at a checkstop, unaware of who they are. The constables see camping gear and maps in their vehicle.

July 23 - RCMP announce Schmegelsky and McLeod are suspects in the three deaths. They release photos of the men and a 2011 grey Toyota Rav 4 they may have been driving. Fox Lake Cree Nation says a burned-out vehicle is found near Gillam, Man., about 170 kilometres east of Split Lake. Police search that area.

July 24 - RCMP confirm the burned-out vehicle near Gillam is the Toyota Rav 4 the suspects are believed to have been driving. The third victim is identified as 64-year-old Leonard Dyck of Vancouver. He was also lecturer in the University of British Columbia's botany department.

July 25 - Manitoba Mounties confirm two sightings of Schmegelsky and McLeod in the Gillam area. RCMP say the sightings, along with no reports of stolen vehicles, lead investigators to believe the suspects are still in the region. They say they are investigating a photograph of Nazi paraphernalia allegedly sent by Schmegelsky to another user on a video game network. Schmegelsky is also pictured in military fatigues brandishing an airsoft rifle and wearing a gas mask.

July 28 - RCMP descend on York Landing, an isolated community southwest of Gillam, after it's reported the suspects were seen at the local dump.

July 29 - RCMP are unable to confirm the sighting and pull back to Gillam.

Officers look through a remote lake area alongside a landed helicopter in the Gillam, Man., area in July 28, 2019 (THE CANADIAN PRESS/HO-Twitter, Royal Canadian Mounted Police, @rcmpmb)

Leonard Dyck of Vancouver is pictured in this handout from British Columbia RCMP.

Lucas Robertson Fowler of Australia (right) and Chynna Deese, a U.S. woman, shown in these RCMP handout photos, were found dead along the Alaska Highway near Liard Hot Springs, south of the B.C. and Yukon boundary. RCMP in northeastern British Columbia confirm they are investigating a double homicide involving the two young travellers. THE CANADIAN PRESS/HO-RCMP