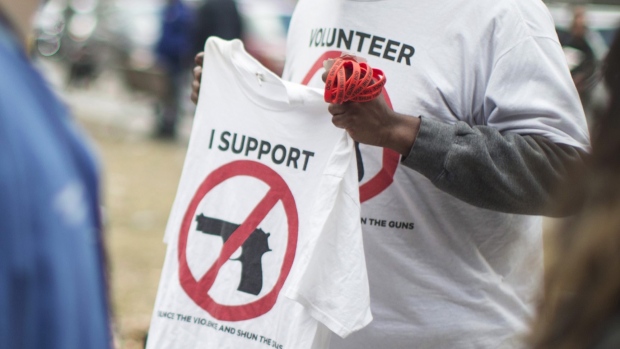 Physicians and health workers protesting in Toronto, walk past a volunteer from the anti-gun group 'Silence the Violence and Shun the Guns,' on Wednesday, April 3, 2019. THE CANADIAN PRESS/Chris Young

My short answer is NO. Not in the slightest.

The Trudeau government recently committed $1 billion to help the provinces and municipalities ban handguns. How on earth they believe that this tremendous chunk of taxpayer money is going to take handguns out of the hands of criminals who would do others harm, is completely mind-boggling to me.

I’ll admit that at one point several years ago, I whimsically supported banning handguns. I was tired of seeing innocent lives taken and reacted in the macro sense, thinking ridding society of handguns that are really only good for shooting “paper (targets) or people” would have an impact. But sober reflection combined with research, analysis, discussions with true law enforcement experts and many friends who are handgun aficionados, told me two things: 1. Banning handguns is an unreasonable expectation. There’s about a million lawfully owned handguns in Canada; and 2. Legal handgun owners are not the threat.

I don’t personally have any skin in this game. Although I Iike guns and carried a handgun (as well as rifles and shotguns) throughout my 36-year police career, I no longer own any firearms. When I did, I was fully trained; acquired and stored them lawfully; and was not a threat to public safety. Similarly, that describes 99.999% of the over 600,000 legal handgun owners in Canada. These folks are not members of gangs and are not committing violent crimes. They’ve had appropriate background checks; are properly trained; and store their firearms safely. The bottom line is they obey the law.

The current Canadian firearms legislation is some of the most restrictive in the world. Unlike our friends to the south, Canadians don’t lawfully carry handguns on their belts, in their nightstands, pockets, gloveboxes and purses. Police here don’t approach every person they encounter with the underlying assumption that the person is armed – either legally or illegally. Our legislation is quite effective.

Crime guns in Canada almost always are smuggled handguns from the United States, where there are more guns than people. Occasionally they are legally owned guns that are stolen for criminal purposes from homes or retailers. On very, very rare occasions, a lawful owner illegally sells a handgun to a criminal or uses a handgun to commit a violent crime. In all my years in policing – including years investigating homicides, I never once saw a lawful owner commit a murder with a handgun. Shotguns, rifles, illegally owned handguns, vehicles, tools, cross-bows, knives, axes, baseball bats and more yes, but never a lawfully owned pistol.

So, who will a provincial or municipal handgun ban impact? Not criminals. Not street gang members, bikers or the mob. It will impact the lawful owners that already obey Canadian legislation.

Criminals are already breaking many serious criminal laws when they possess hand guns and even moreso when they use them. These offences carry potential sentences that may see them incarcerated for years – as long as members of the judiciary don’t treat the offences lightly and have dangerous criminals beat the investigating officers back out onto the streets of their cities.

How often have we read media reports where criminals arrested for violent crime were out on bail when they committed further violent crimes, only to be released on bail yet again? How many police chiefs have made public pleas to judges to seriously recognize the threat gang members are to public safety before releasing them to commit more violent crimes and put the public and cops in further jeopardy?

Just this month, the Liberal government introduced Bill C-5, which if passed will see some mandatory minimum penalties repealed, including several firearms offences.Offences like Discharging a firearm with intent; Using a firearm or imitation firearm in the commission of offence; and Robbery with a firearm. You know, those run of the mill crimes that have little or no impact on public or police officer safety. Akin to shoplifting a candy bar or unlawfully trapping a bullfrog out of season!

Criminal laws are the only effective leverage we have left, but government doesn’t want to get tougher on gun crime, they want to pull some of the teeth from that one remaining tool. Police are continually threatened with defunding. They’ve lost the ability to street check known gang members. Strategies like bail compliance aren’t effective in a catch and release environment. Gang bangers are no longer afraid of being shaken down by good officers despite proudly wearing gang colours and insignias to show their criminal organization affiliations to the world.

The RCMP are so underfunded that they have little to no resources to chase organized crime or fight smuggling. And gun smuggling requires a tremendous focus. But let’s take a billion dollars and establish provincial and/or municipal laws banning handguns, with limited search and seizure provisions and almost no imprisonment ability. That is not going to cause gang members to run out to find God and seek lawful employment. They aren’t afraid of criminal laws and jail, so the threat of a Provincial Offence Notice from a cop or a ticket from a by-law officer likely won’t result in them cowering in fear or lining up to turn in their guns. Much like the Liberal government promise that legalized marijuana was going to put organized crime out of the marijuana business, it’s laughable.

It’s time to get tougher, not weaker. Let’s put the money into better protecting the public and our men and women in blue, as opposed to placing them at even greater risk.