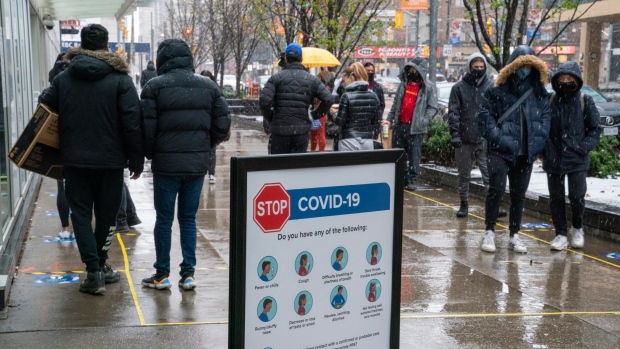 FILE - Crowds of people line up outside an electronics store in Toronto on Sunday November 22, 2020. THE CANADIAN PRESS/Frank Gunn

About 40 per cent of businesses inspected in Ontario over the weekend were found to not be complying with provincial COVID-19 regulations.

According to officials, 428 businesses in Toronto, Hamilton and Kitchener-Waterloo were visited by provincial offence officers on Saturday and Sunday. In total, 48 tickets were issued to businesses and individuals for not complying with COVID-19 public health measures.

The province did not name the businesses that were ticketed under the Reopening Ontario Act.

Of the 48 tickets handed out over the weekend, 17 were given out at stores in Toronto, 19 were issued in Hamilton and 12 were distributed in Kitchener-Waterloo.

Compliance rate was highest in Toronto at 70.6 per cent, followed by Kitchener-Waterloo at 54.6 per cent.

Slightly under half of businesses inspected in Hamilton (49.6 per cent) were found to be compliant with COVID-19 regulations.

On Sunday afternoon, Minister of Labour Monte McNaughton said there are “no excuses at this point in the game” to be found non-compliant with the rules.

“Every business knows what to do,” he said. “This is not good enough.”

McNaughton said that some of the infractions included issues with sanitation and cleanliness of common areas, business capacity, as well as masking protocols not being followed.

Prior to this weekend, 112 tickets had been issued since Jan. 1 to businesses and individuals for not complying with COVID-19 public health measures.