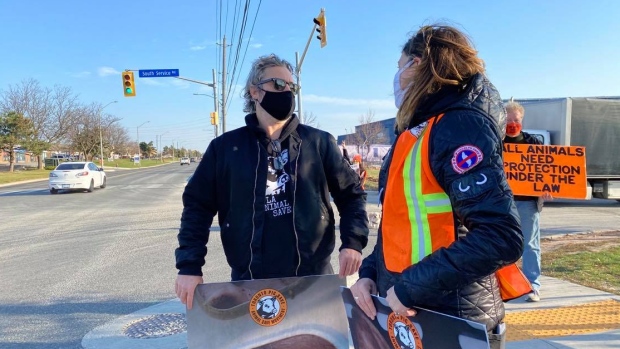 Actor Joaquin Phoenix attended a vigil for an animal rights activist who died last summer after being struck and killed by a truck during a protest in Burlington. (Courtesy: Toronto Pig Save/Save Movement)

Hollywood actor Joaquin Phoenix attended a vigil Friday morning for an animal rights activist who was killed when she was hit by a truck while protesting in Burlington in the summer.

On June 19, the 65-year-old was feeding water to pigs that were in a truck en route to the slaughterhouse when she was struck and killed by a truck.

Phoenix was seen Friday talking with advocates and taking pictures while holding a sign that said “Fearman’s slaughterhouse showed me no mercy.”

It is unknown how long the American actor has been visiting Ontario. 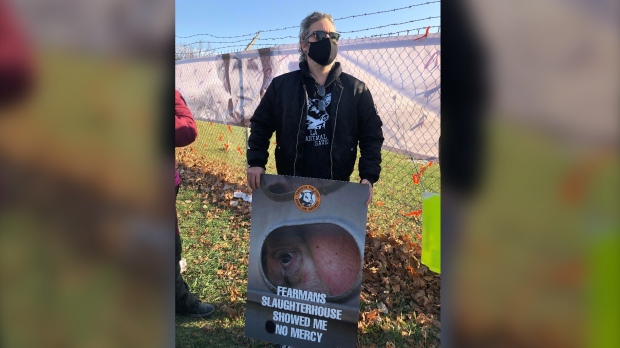 "I am here to honour Regan and to all the activists that dedicated their lives to ending this injustice," Phoenix said at the vigil.

Phoenix- who is an avid environmentalist and animal rights activist- spoke publicly about the incident in June saying “Russell spent the final moments of her life providing comfort to pigs who had never experienced the touch of a kind hand.”

Joaquin Phoenix joins @TorontoPigSave at slaughterhouse in Canada to honour slain animal rights pioneer #ReganRussell and to bear witness to the pigs. pic.twitter.com/njEwfq6GAU

“While her tragic death has brought upon deep sorrow in the Animal Save community, we will honor her memory by vigorously confronting the cruelties she fought so hard to prevent by marching with Black Lives, protecting Indigenous rights, fighting for LGBTQ equality, and living a compassionate vegan life,” Phoenix said in a statement.

“The Ontario government can attempt to silence us with the passage of its Ag-Gag bill – Bill 156 – but we will never go away and we will never back down,” he added.

Phoenix’s comments were in reference to the government’s Security from Trespass and Protecting Food Safety Act. Parts of the act went into effect on Sept. 2, specifically sections that prohibit anyone from stopping, hindering, obstructing or otherwise interfering with a vehicle transporting farm animals.

The PC government says the act is intended to “protect farm animals, the food supply, farmers and others from risks that are created when trespassers enter places where farm animals are kept or when persons engage in unauthorized interactions with farm animals.”

But Phoenix, along with other activists, believe the bill infringes upon their rights to hold peaceful protests. 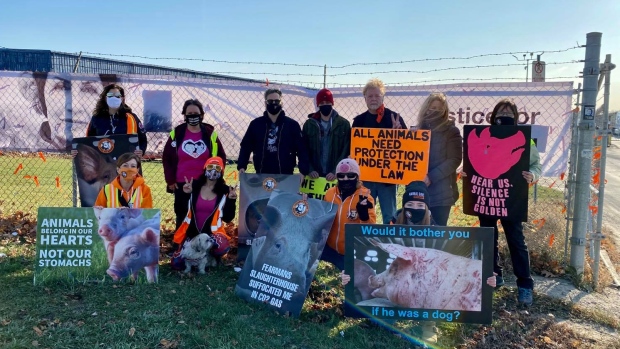 In a statement, co-founder of Animal Save Movement Anita Krajnc said she has seen “an increase in aggressive behaviour from the animal agriculture industry and certain truckers toward animal rights activists, both online and at vigils” since the passage of the bill.

The 28-year-old driver who struck Russell did not face criminal charges for the incident. Instead, he was charged with careless driving causing death, a provincial traffic offence that could result in anything from a fine to two years in jail.

Halton police said there was no evidence to suggest the driver acted with criminal intent when Russell was struck and killed.