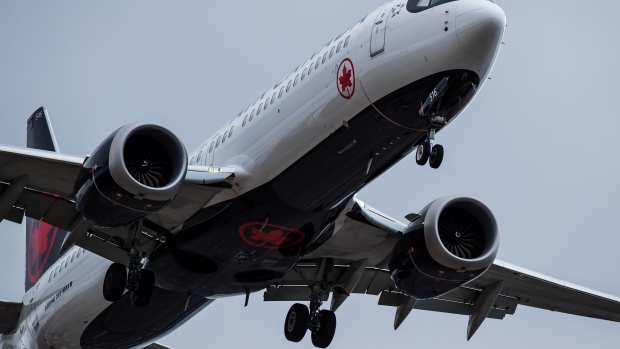 TORONTO -- Canada's two largest airlines have at least one of the optional safety features on their Boeing 737 Max 8 aircraft that were reportedly lacking on the jets that crashed in Ethiopia and Indonesia.

Air Canada and WestJet Airlines both say they purchased disagree lights used by the aircraft's software system during flight to avert stalls.

The New York Times has reported the Ethiopian Airlines and Lion Air jets involved in recent fatal crashes were not equipped with angle of attack indicators and disagree lights.

According to the report, the safety features are not standard on the aircraft and are offered by Boeing as upgrades.

However, WestJet spokeswoman Morgan Bell said the Calgary-based airline's 13 Max 8 planes are not configured with the angle of attack indicators.

Neither airline would disclose the cost of purchasing these options.

Sunwing Airlines, which has four Max 8s, and Boeing didn't immediately respond to a request for comment.

The indicators help pilots detect any erroneous readings from two vanelike sensors that determine the position of the plane's nose relative to oncoming air.

The angle of attack indicator displays the readings of the two sensors while the disagree light is activated if the sensors don't provide the same information, the U.S. daily said.

The MCAS system can automatically push down the plane's nose to prevent stalling if it determines that the it is pointing up at a dangerous level.

The New York Times also said, citing unnamed sources, that Boeing will soon update the MCAS software and make the disagree light standard on all new 737 Max planes, but maintain the angle of attack indicator as an option.

The causes of the Ethiopian Airlines crash on March 10 and the Lion Air crash five months earlier, both on takeoff, are being investigated. Investigators are looking at whether a new software system added to avoid stalls may have been a contributing factor.

Air Canada has removed its grounded Boeing 737 Max 8 jets from service until at least July 1 in order to provide more certainty for passengers that wish to book flights in the coming months.

The two airline rivals have also suspended their 2019 financial guidances.