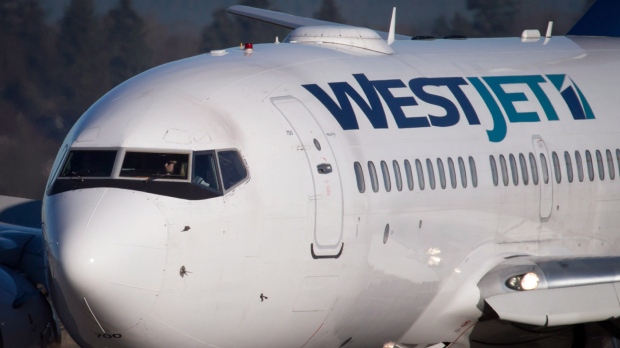 A pilot taxis a Westjet Boeing 737-700 plane to a gate after arriving at Vancouver International Airport in Richmond, B.C., on February 3, 2014. THE CANADIAN PRESS/Darryl Dyck

Air Canada has blocked the sale of adjacent seats in economy class, and WestJet has done the same throughout the entire plane, to help prevent the spread of COVID-19.

The carriers said Friday they will revert to health recommendations from the United Nation's aviation agency and the International International Air Transport Association (IATA) trade group.

IATA called last month for an end to in-flight physical distancing rules, proposing a range of measures including some that run counter to federal government policies.

Transport Canada listed physical distancing among the “key points” in preventing the spread of the virus as part of a guide issued to the aviation industry in April.

“Operators should develop guidance for spacing passengers aboard aircraft when possible to optimize social distancing,” the document states.

Some health experts have highlighted the risks of spreading COVID in crowded airports and packed cabins.

“Once it's in the cabin, it's difficult to stop air moving around,” said Tim Sly, an epidemiologist and professor emeritus at Ryerson University's School of Public Health.

In line with federal directives, Air Canada and WestJet conduct pre-boarding temperature checks and require masks on board. They have also implemented enhanced aircraft cleaning and scaled back their in-flight service in late March, cutting out hot drinks, hot meals and fresh food.

“The new measures will continue to build on the recommendations of ICAO (the UN's International Civil Aviation Organization) and others that a multi-layered strategy to COVID-19 safety is most effective,” Air Canada spokesman Peter Fitzpatrick said in an email.

WestJet said its online booking will return to normal on Wednesday.

“Moving forward, our cabin crew are able to assist should there be space to accommodate and we encourage guests to discuss seating arrangements with them once onboard,” said spokeswoman Morgan Bell.

Canadians are beginning to brave air travel again as confinement measures lift, though Manitoba and the Maritimes still have strong restrictions on interprovincial travel in place while other provinces discourage it.

Swoop, a budget airline owned by WestJet, added eight weekly flights in June with 12 more coming in July after the carrier cut capacity to a single line of flight per day - Halifax-Hamilton-Edmonton-Abbotsford and back.

“We're in this minus 95 per cent mode right now,” Swoop president Charles Duncan said in an interview. “It doesn't get much worse than this.”

Hope is on the horizon, however.

“At the height of it, it was common to have under 20 people on a plane. But from Vancouver just now I brought in 65. Earlier in the day from Edmonton to Vancouver we had over 100,” said WestJet flight attendant Chris Rauenbusch, president of CUPE Local 4070.

With a file from The Associated Press