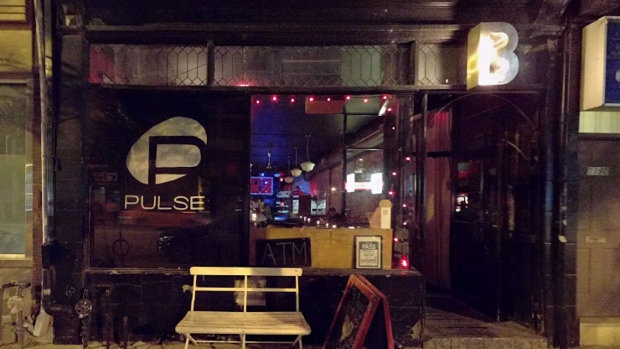 A Pulse nightclub logo sits in the window of The Beaver on Queen Street West Tuesday June 14, 2016, in solidarity with the victims of a mass shooting at Orlando's Pulse gay nightclub. (Rob Shostak)

A Toronto gay bar is showing its solidarity with the victims of a mass shooting in Orlando by temporarily adopting the signage of the gay nightclub where the horrific crime took place.

On Tuesday, The Beaver, located in the city’s trendy West Queen West neighbourhood, posted a “Pulse” sign in its window designed based on the logo of the Orlando club where 49 people were gunned down Sunday in the worst mass shooting in U.S. history.

According to Shostak, the message is that ‘all queer spaces are Pulse.’

He pointed out that bars or clubs are often the first “fully queer spaces” people encounter when they come out.

Shostak, for whom The Beaver has been “a second home” since he moved to Toronto ten years ago, said he got the idea yesterday and immediately called the bar’s general manger, Patrick McKeegan.

“Pat said ‘yeah for sure– right away.’ And so I just went there after work and I started working on their patio, drawing it out and then painting it and a couple of hours later we put it up in the window,” Shostak said.

McKeegan said The Beaver is happy to help the Toronto LGBT community show solidarity with Orlando.

“People are really appreciative and the response has been really positive which is nice,” McKeegan said “We’re an LGBT space and we just wanted to show solidarity. That’s the whole reason and the message behind it.”

He said the bar will also be collecting donations this week on behalf of Equality Florida, an LGBT group that is supporting the victims of the shooting and their families. The group has already raised more than $4.5 million through a record-breaking GoFundMe campaign toward a goal of $6 million.

“Our community was really impacted by everything that happened and I just thought it was important for us to acknowledge that in a visual way,” McKeegan said. “It’s definitely been right at the front of everyone’s minds. It’s been a pretty sombre couple of days for sure.”

‘We spend our whole lives fighting’

According to Shostak, the sign shows solidarity, but also how much work must still be done.

“I feel like the queer community – we spend our whole lives fighting,” he said, pointing to battles to be accepted by friends and family, for marriage equality, to donate blood or to be addressed by a chosen gender.

“It goes on and on and we’re always fighting for our right to exist just like everyone else,” he said.

Shostak said that while Canada might have better gun laws, the same hate that motivated the Orlando shooting can be found around the world, including Canada.

“This could have easily happened at the Beaver or at Woody’s,” he said. “These kinds of things do happen in our community. Someone might not be coming with a gun, but with a rock, with words, whatever.”

Shostak said he’d like to see other gay businesses around the city adopt the “Pulse” sign as a show of solidarity.

“I did this because I felt it would be nice to connect the communities of Orlando and Toronto and it’s also a reminder to everyone that walks by that it is a queer space and that they’re welcome,” he said “But also that we have a long way to go when it comes to our right to feel safe and to feel loved.”

A Pulse nightclub logo sits in the window of The Beaver on Queen Street West Tuesday June 14, 2016, in solidarity with the victims of a mass shooting at Orlando's Pulse gay nightclub. (Rob Shostak)