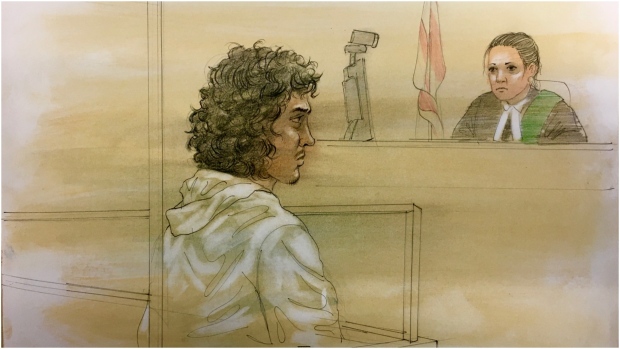 A 19-year-old man accused of stabbing several people outside a Halloween party, fatally wounding one of them, appeared briefly on a video teleconference screen in a College Park courtroom on Monday morning.

Toronto police were called to a house at 22 Madison Avenue, north of Bloor Street, shortly before midnight on Oct. 31 for a report of three people stabbed outside.

Investigators said two people became angry outside the home after being denied entry to a Halloween party inside.

They both forced their way in, slashing and stabbing people inside, and then outside as they were leaving, police said.

Officers arrived at the party to find three people suffering from stab wounds.

A further search of the area led them to locate two other victims suffering from minor injuries.

One of those stabbed, 19-year-old Firdous Nabizada, died in hospital on Nov. 2.

One suspect, later identified as Jacob Alves, 19, was detained by police roughly an hour after the altercation began.

A second suspect, a 15-year-old girl from Richmond Hill who cannot be identified per the terms of the Youth Criminal Justice Act, was arrested some time later.

Alves appeared at College Park via video link on Monday.

His case was put over until the morning of Dec. 2.

He faces charges of second-degree murder, aggravated assault, assault with a weapon and weapons dangerous.

Police investigate following a stabbing at a Halloween party on Madison Avenue in The Annex.