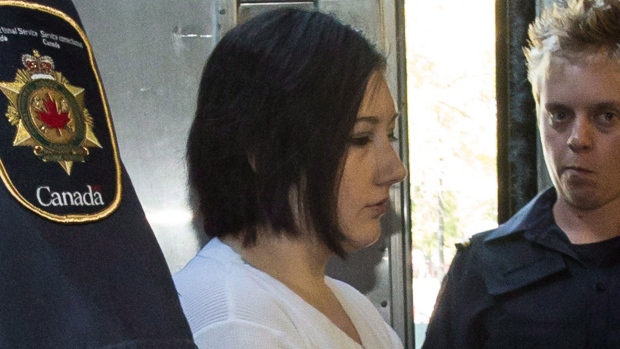 Terri-Lynne McClintic, convicted in the death of 8-year-old Woodstock, Ont., girl Victoria Stafford, is escorted into court in Kitchener, Ont., on Wednesday, September 12, 2012 for her trial in an assault on another inmate while in prison. THE CANADIAN PRESS/ Geoff Robins

An application objecting the transfer of a woman currently serving a life sentence for her part in the killing of Woodstock, Ont. girl Tori Stafford from a healing lodge back to a medium security prison has been retracted, her lawyers said.

The application, filed by convicted killer Terri Lynne McClintic, disputed her transfer from a healing lodge in Saskatchewan to the Edmonton Institution for Women on Nov. 8, 2018.

She was brought to the healing lodge in December 2017, which sparked public outcry, after spending four years at the Grand Valley Institution for Women near Kitchener.

The 28-year-old is currently at the women’s prison near Kitchener.

The application, submitted on April 30, said McClintic “experienced a loss of residual liberty as a consequence of being transferred from the lodge.”

On Wednesday, McClintic’s lawyers said the application was “discontinued” on May 10.

“The application was for a review of the legality of McClintic’s transfer and it’s compliance with applicable legislation and rules,” Kelsey Sitar and Sarah Rankin wrote in an email sent to CP24. “The application is no longer active.”

McClintic pleaded guilty in 2010 to first-degree murder for her part in the murder of eight-year-old Tori Stafford.

The young girl was lured from her school in Woodstock, Ont. back in 2009 and then driven to a field where she was sexually assaulted and killed.

Michael Rafferty, McClintic’s former boyfriend, was convicted of kidnapping, sexual assault causing bodily harm and first-degree murder in the case back in 2012. He is also serving a life sentence.

At the time of McClintic’s transfer back to a medium security prison, Tori Stafford’s father, Rodney Stafford, said he felt “ecstatic” about the decision.

“It’s a great feeling to know that justice is going to be served,” he said.

After hearing McClintic was challenging the transfer, he said his daughter’s killer doesn’t deserve anything.

“Every one of us in my family lost our lives when we lost Victoria,” he said. “We lost Victoria, we lost our rights, we lost a lot of things so her claiming that she has lost her liberty is kind of heartbreaking.”

“My family doesn’t deserve this – we have suffered enough.”